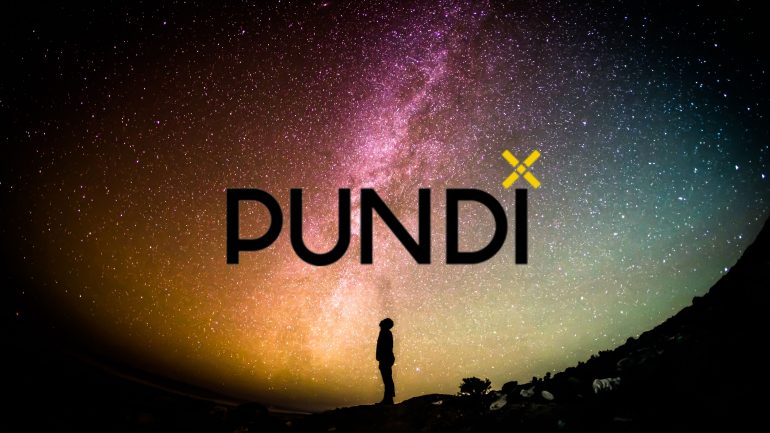 Pundi X (NPXS) is a relatively new cryptocurrency that boasts one of the most praiseworthy goals in this particular sphere – that of simplifying the use of cryptocurrency. It aims to do so by providing its users with a simple way of purchasing goods and services using cryptocurrency.

As a whole, the decentralized platform is based on three inter-playing pieces of technology: the Pundi X platform, its mobile wallets, and the card payment system. Pundi X aims to distribute various PoS (point-of-sale) smart devices to retailers who will be then able to accept payments in the form of Pundi X tokens. Customers can either pay for goods with the cryptocurrency already stored on a wallet or purchase cryptocurrency. The tokens will also play a big part in qualifying customers for various discounts, as well as for supplying gas for the transactions and advertisements.

The company has put it straightforwardly in the project’s whitepaper that it is aiming to establish itself as the Walmart or 7-Eleven of blockchains. Pundi X also claims that their system is better than Bitcoin ATMs. First of all, the devices are smaller than the Bitcoin ATMs, and the involved costs will be lower. The fact that the devices are portable and that they offer greater utility than Bitcoin ATMs is also bound to make a difference.

The team behind the project vowed to distribute more than 100,000 devices within the next three years in the hopes that the platform will become the biggest decentralized offline cryptocurrency.

The distribution of the new PoS devices took place in Indonesia, the largest country in South-East Asia. The team plans to expand their services throughout other Asian countries such as Thailand and Malaysia.

Every PoS device will be connected to the Ethereum and NEM blockchain via components called XPlugins. This means that blockchain developers from all over the world can connect to  the Pundi X network’s devices and financial outlets. 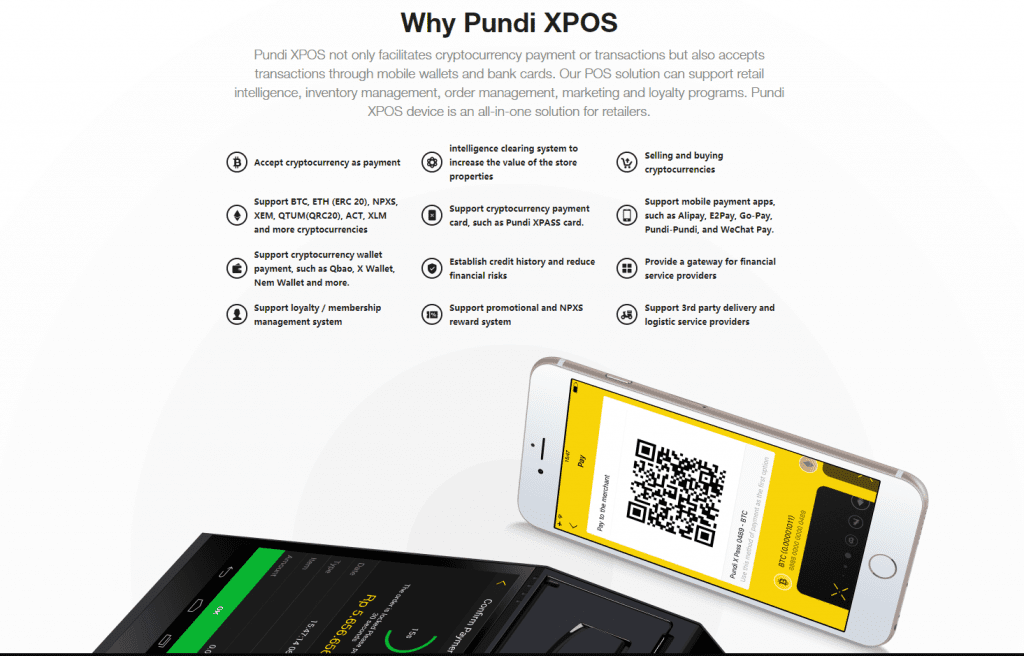 The mobile wallet is part of why Pundi X is so easy to use. This particular wallet ensures that users don’t have to manage their public and private keys as in the case of so many cryptocurrencies out there. Instead, users can use a password system that is fairly similar to that usually associated with bank-related procedures.

The smart card is yet another reason why this system is so user-friendly. One of the main reasons why this card is so useful is the fact that it can be used without requiring the mobile application. However, it can work in conjunction with the mobile app. It allows users to pay with funds from crypto wallets or traditional mobile wallets.

With the help of this smart card, Pundi X is providing everyone with the possibility of buying products using cryptocurrency. According to the whitepaper, “most cryptocurrencies can only be used to buy other cryptocurrencies (and this) reduces the relevance of them to almost zero for most people.”

Pundi X’s platform is made out of everything from software protocols to all the hardware devices involved in the functioning of the Pundi X ecosystem. These include all the PoS devices, as well as all the involved SDKs and APIs. 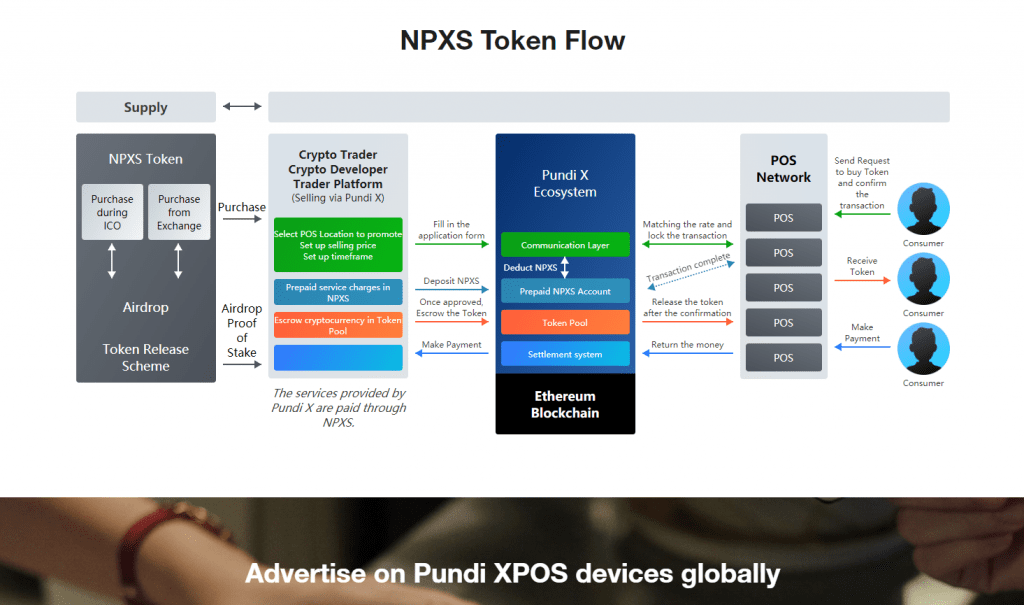 Pundi X is led by a team of crypto-savvy individuals from Shenzhen, China, Jakarta, and Indonesia. The research and development team is currently operating out of Shenzhen with 14 employees, and the management and operations team are based in Jakarta and Indonesia.

One of the most important names associated with the project is that of Constantin Papadimitriou, Pundi X’s President Advisor. Papadimitriou is a financial tech expert and also the founder of two of Indonesia’s largest companies of this sort, Infinetworks, and E2Pay. 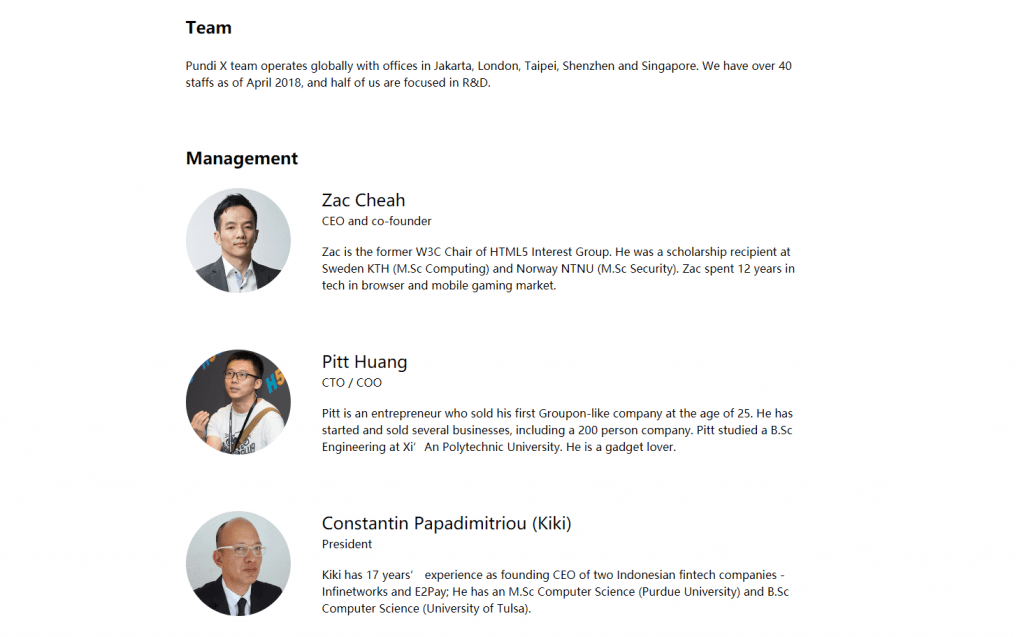 Since its launch, Pundi X has been on a slow rise. The project’s wallet has generated over 100,000 downloads by over 500 merchants. The most interesting fact about this project is not that it aims to grow, but that it also ensures the growth of the whole crypto market.

Currently, the price of the token is somewhere around the $0.004378 mark which should make this project a very good long-term investment, especially since more and more Indonesian retailers will adopt the POS devices.

According to the roadmap, 2018 is announced to be a very important year for Pundi X, as the company aims to establish new offices in London as well as Tokyo, Seoul, and North and South Americas.

Currently, Pundi X can be traded on some of the most popular crypto exchanges out there such as Binance, IDEX, Coinnest, CoinBene, Hotbit, Gate.io, and Tidex. More information is available in the Markets section on CoinMarketCap.

The project is present on all the major social media and video sharing platforms such as Facebook, Twitter, Linked In, Reddit, Telegram, and YouTube. For more general information about the project, users can check out the official FAQ section.

Pundi X is without a doubt a very promising project that may very well become one of the largest offline cryptocurrency sales networks in the world. The task Pundi X has chosen, that of bringing cryptocurrency a bit closer to the everyday person, is nothing short of praiseworthy and ambitious.

If you’re still not convinced about the project’s potential, then it might be worth taking a look at the partnerships the company has managed to secure. Some of the most important collaborations are with NEM, E2Pay.co.id, fintech Indonesia, Xpos Consortium, Achain, Aditus, LoyalCoin, SFA, Retainly, and STELLAR. These are very good examples of how the company aims to increase engagement and adoption rates with third-party contributions.