Ambrosus continues to launch its platform for using its blockchain to participate in internet-of-things smart tracking—with an early focus on food and medicine. Next month, Ambrosus will follow up it’s NET 1.0 launch with AMB-TEST, another network that will converge into its main net in October.

In doing so, it will launch a platform is has been busy acquiring customers to participate in. At the same time as its official launch, Ambrosus will also launch its masternode platform for investors, regulators, companeis and governments.

As it tests it out in August, the company will look for ways to shore up its blockchain code base and ensure it is ready for proper launch to fill the needs of its various customers and partners.

For those holding the AMB coin, this is welcomed news. The masternodes range from holders of 250,000 AMB coins to 10,000 AMB coins and each come with their own responsibility in the upkeep of the Ambrosus network. For the lower level (75,000 or 30,000 or 10,000) for instance, node holders will be responsibility for storing data from blockchain activity, and may be asked, as a task, to recall historical data. This ensures the legitimacy of the network, and ndoe holders will earn a monetary reward (derived from the payment to the Ambrosus chain for transacting a “bundle”. 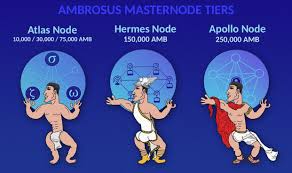 Ambrosus has been busy building its partnership base. These partners will form the basis of its blockchain, as they’ll use it for tracking and ledger information and history. Here’s a thread in which users have put together partners and potential ones with rumors.

As the Ambrosus release says,

“Architecturally, our eco-system will allow businesses to seamlessly connect with one another, in order to improve supply chain efficiency, transparency, and security.

As a coin, it’s an interesting investment opportunity if you can get to the 10,000 level or find a pool that will allow you to combine coins. Below is a graphic made by a user with a potential ROI% for Ambrosus node holders. 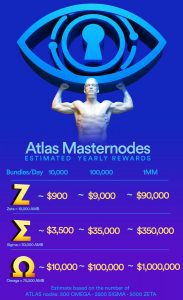