Dark Country is a trading card game set in a Gothic Wild West with rangers, cowboys, haunted Indians, zombies, ghosts, and demons. If you love the Wild West and its history then you will also love this game. It was developed by Immortal Games and this game supports Ethereum, EOS, TRX, WAX, FLOW, and other blockchain networks.

Dark Country is a game that blends together all the best features of trading card games and was heavily inspired by Hearthstone and Magic: The Gathering. The developers bring together all the good elements in this genre to make this game one of the best.

The game features a unique take on the traditional trading card game mechanics with a focus on strategy. With over 200 cards to collect and trade, you can create your own deck of characters and challenge your friends to play. The game is played over a series of rounds where players take turns drawing cards from their decks and playing them at the center of the table. Each card has a unique ability that can be used once per turn. The goal of the game is to reduce your opponent’s health to zero before they do yours.

In this guide, we’ll be walking you through everything you need to know about playing Dark Country. We’ll start with a brief overview of the game and its mechanics and then we’ll dive into more specific topics.

What type of game is Dark Country?

Dark Country is a trading card game that combines strategic deck-building with features of trading cards and was inspired by Magic: The Gathering, Hearthstone, and other trading card games. In Dark Country, you can build your own deck by choosing the right cards. You can choose from more than two hundred different cards to create your own unique deck and defeat your opponent’s decks.

The game is played between two players who each have their own deck of cards representing characters and abilities they can use during gameplay. You must build your deck before playing the game by choosing which cards to include in it from a larger pool available within the game’s interface. Each card has its own strengths and weaknesses which make them more or less useful than other types depending on your current strategy or tactics at any given time during gameplay.

Dark Country blends deck-building and trading card game elements in a way that’s completely unique. With its strategic gameplay, Dark Country will have you thinking through every move you make.

Dark Country takes place in a dark, cursed land. The King once made treaties with all of the countries in the world, but he broke his promises to everyone. He was desperate to protect his country, so he decided to perform an ancient ritual called The Ancestral Guard.

He expected the dead soldiers to come back to life. But in the process of resurrecting them, something went wrong and now there are hordes of undead monsters in the country.

Dark Country is a revolutionary trading card game that allows users to play on multiple blockchains at once. You can play this game on its own blockchain while also playing others on other blockchains all at once. The possibilities are endless.

This game features two main modes in the Play To Earn game: a trading card game and strategic gameplay based on Dark Country Lands. In the trading card game, you’ll have to collect cards and build your own deck in order to beat other players online. If you prefer the strategic side, then Dark Country Lands is perfect for you. This mode gives you access to various land types, which each have their own unique properties and abilities.

Dark Country also has 300 beautiful cards worth a stand-alone gallery, so you can see the best of what’s out there. You can check it out here: https://bit.ly/3bDsNcy

Dark Country took their roadmap and executed it well. They managed to launch the game on the schedule, and they also released new content as promised. They did not miss any deadlines which is a huge accomplishment for this project. The game was also well received by critics and players alike. It’s great to see that Dark Country has been able to accomplish so much while still maintaining a high quality of work.

Here’s the roadmap for the Dark Country game:  https://bit.ly/3Qw2K60

What is Dark Country Use-Case?

Dark country is a trading card game that supports several blockchains, including WAX, Flow, and others. It’s the first of its kind. It is possible for users to play this game on any blockchain they want. You no longer have to choose between Ethereum and EOS, you can go to the game and play wherever you like

What is Dark Country Monetization Strategy?

Landowners can earn Shadow Dimes every day by playing the game and developing their land. The Dark Portal is the centerpiece of the continent, where landowners can collect their daily SDM tokens.

Also, when players complete quests they earn SDM (Shadow Dimes) tokens. They can use these coins to upgrade buildings or buy new ones, or they can use them to upgrade existing buildings. The addition of Shadow Dimes is the biggest play-to-earn mechanic that SDM has added to the game so far. 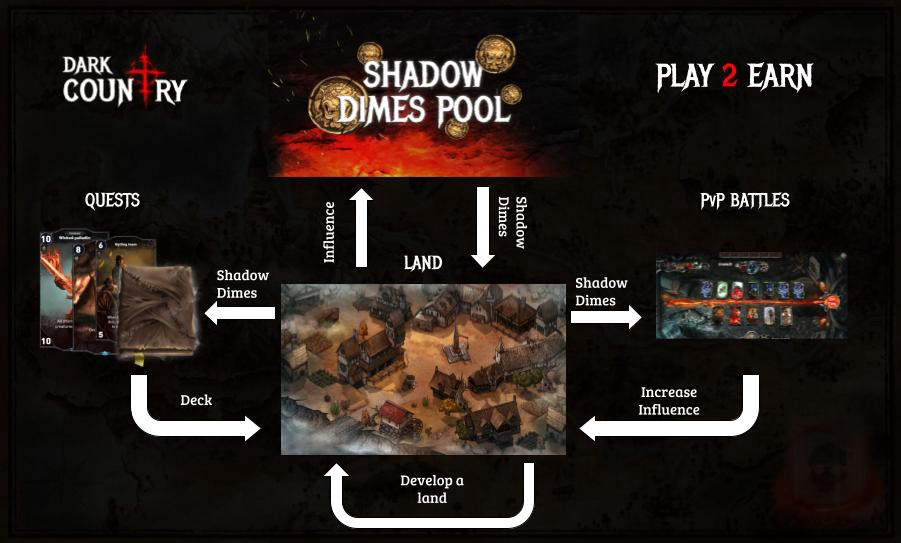 What is Dark Country Tokenomics?

The total supply of SDM is 100 billion per blockchain. 0.01% of what remains in the play-to-earn pool is distributed daily to landowners according to their total influence. The Dark Country team does not hold any SDM. They have a reserve pool to be used for future in-game events such as play to earn, metagame levels, guild wars, and global tournaments.

Who Is The Team Dark Country Unchained?

Dark Country is a game developed by Immortal Games. The people behind this project are:

Who Are The Investors Behinds Dark Country?

In order to make Dark Country game a reality, they have partnered with several organizations and companies including:

What was Dark Country Release Date?

If you’re interested in learning more about this game or want to give it a try, check out the website at https://darkcountry.io/.

When was Dark Country Pre-Sale?

Dark Country game pre-sale is over and it was successful last year 2021. The users must have a Flow account, Flow tokens, and register on the waitlist via their landing page. They can reserve a maximum of 15 packs. A maximum of 5 packs of the same type can be purchased per account.

Everyone can purchase up to the number of packs they specified during the waitlist signup process, but there is no guarantee that there will be enough inventory for everyone in the queue.

Overall, Dark Country is shaping up to be a fun and entertaining trading card game that is both challenging and entertaining. With plenty of cards to collect and the promise of future updates, it’s a great game for anyone looking for a new way to engage with this genre. We think this game has the potential to be a hit, and we’re excited to see how it develops.

Have you ever thought about what it would be like to play a blockchain-based card game set in a gothic horror universe? If so, leave us your thoughts in the comment section below.