Dracards is a trading card game with a multiverse that anyone can explore and earn tokens through fun and randomized gameplay. Players can engage in battles, trade cards, and build decks, as well as do many other things within the Dracards universe. Dracards is built on a Cardano blockchain economic design that can be used to compensate players for their contributions to the ecosystem (Play to earn). 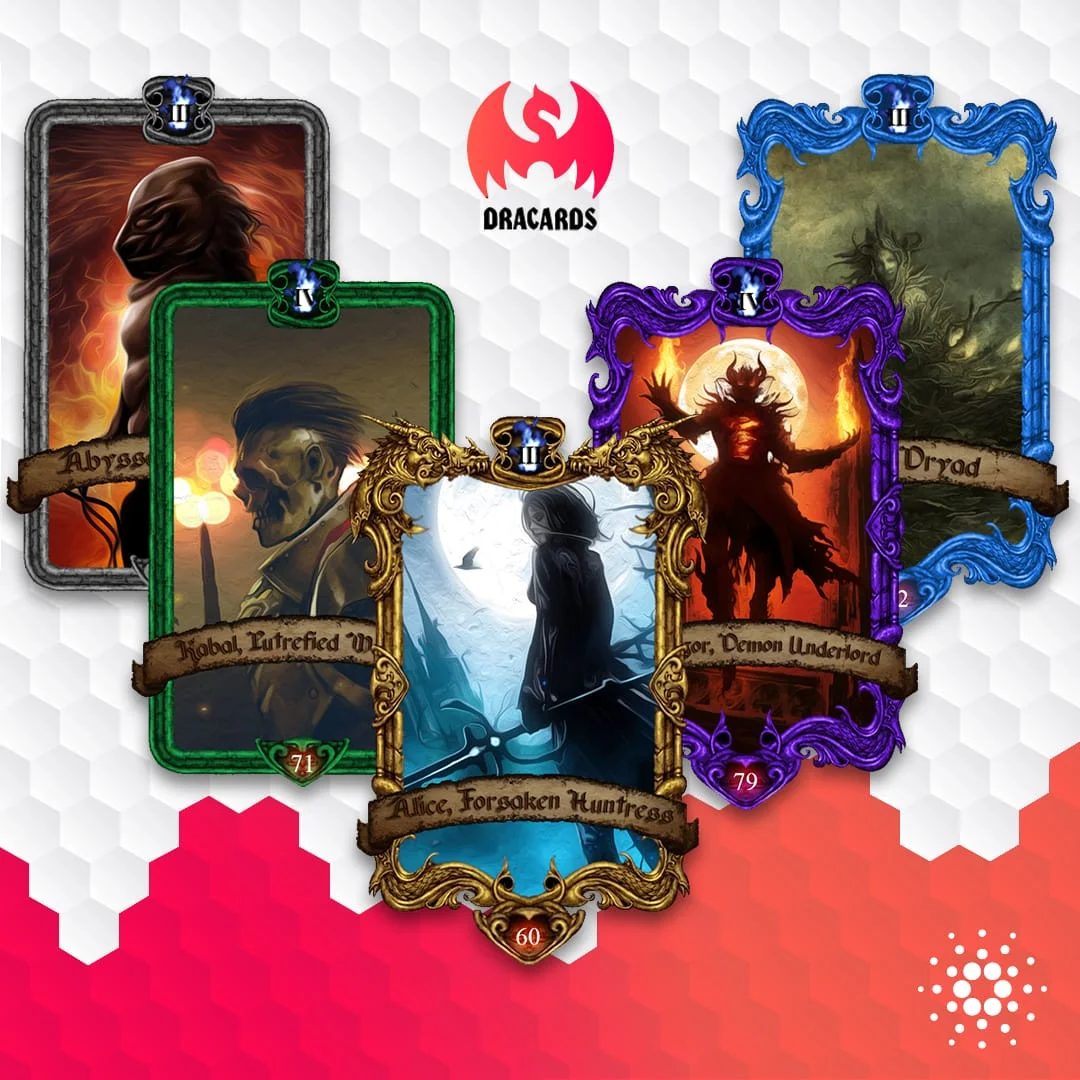 Dracards Fire (FIRE) token is used as a currency in the Dracards ecosystem. FIRE token goal is to be the main currency of trading cards by creating a bridge between physical and digital assets. By interacting with the Dracards Universe, players will earn Fire tokens.

By staking their tokens, FIRE holders can claim rewards, as well as play the game and participate in votes to decide new elements. Players can earn $FIRE by playing minigames, and can even earn $FIRE by creating content for the Dracards Universe through an interactive platform.

If you are looking to learn more about this game Dracards, we’ve got you covered. We know you are curious about this game. That’s why we have put together this quick guide to help you understand what it is and how it works

What type of game is Dracards?

Dracards is a fantasy trading card game that takes place in a multiverse. The game’s functionality will be built with input from the Community through an interactive platform. Dracards team is adding more fun and exciting features to the game, which will increase engagement and bring new users into the network.

The concept for this game is a battle system that draws inspiration from popular, successful games such as Hearthstone, Gwent, and AutoChess. In this game, players must build a deck with 50 cards that are randomly scrambled and drafted at the start of each battle. 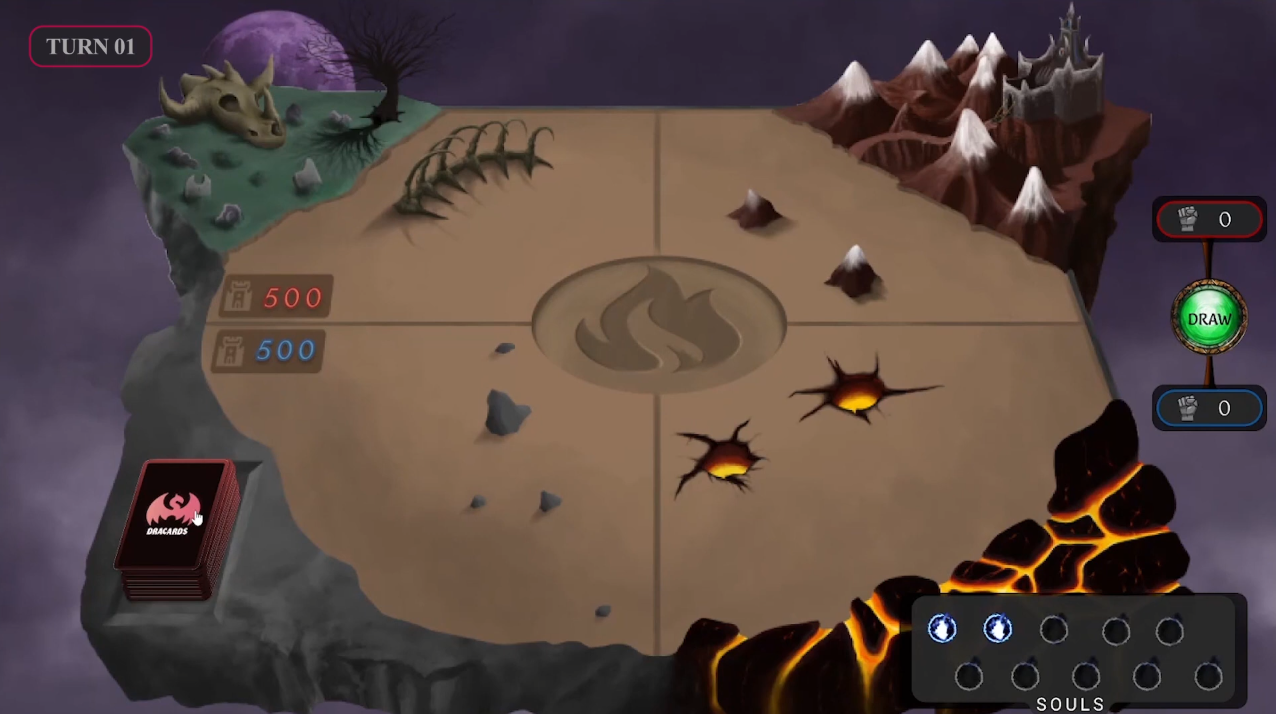 PvE will be a more casual type of farming, where players will have to use the cards they have to get rewards. Players can send their cards on various missions, which each require different types of fulfilments. When you take a closer look at the expedition, you’ll see where each card will be placed and what cards are needed to complete the mission. In addition to the randomized gameplay mentioned, Dracards plan to hold tournaments that reward players with tokens and other prizes.

In February 2022, developers began the creation and introduction of the Dracards metaverse. They launched a map of the world and with that a display of different regions of this environment.

The High Market was the first region to launch and be marketed in, with new regions set to be released at a later date. Within this region, several buildings and structures were made available for players and investors to acquire. These buildings are the first part of a staking system that aims to create an economically sustainable metaverse.

Fire Passive Staking is a function that was added in order to benefit every member of the community that holds FIRE on their wallet or provides liquidity to one of its pools (SundaeSwap and Minswap). On the Dracards website, you’ll be able to log in with a wallet that’s integrated with the Nami wallet. Users will be able to follow the history of their wallets through a panel that shows periods in which they held FIRES or LP tokens.

On every epoch of the blockchain, a snapshot of wallets holding FIRES/LP Tokens will be taken. This snapshot lets the wallet holder claim their FIRES reward by just clicking a button.

Dracards is a game that has a clear roadmap for the future. Its whitepaper details the long-term plans for the game, which include new features and functionality as well as growth goals. It’s easy to see where the game is going, and what it will look like once it gets there.

If you want to learn more about their roadmap you can find it here: https://bit.ly/3R0iK0h

Dracard FIRE token goal is to be the main currency of the trading card games, which is translating to the physical world or NFT. The idea is that you can use the token to buy and sell cards on the open market or even use it for purchases in-game. The developers are hoping that this will lead to a whole new ecosystem of games built around collecting, trading, and selling cards.

What is Dracards Monetization Strategy?

Players can earn $FIRE and rewards by:

$FIRE is the native token of Cardano, and it will be made available in a pre-determined 36-month schedule starting from public purchase. The initial circulation supply is 15,847,000 FIRE (15.85% of total stock). 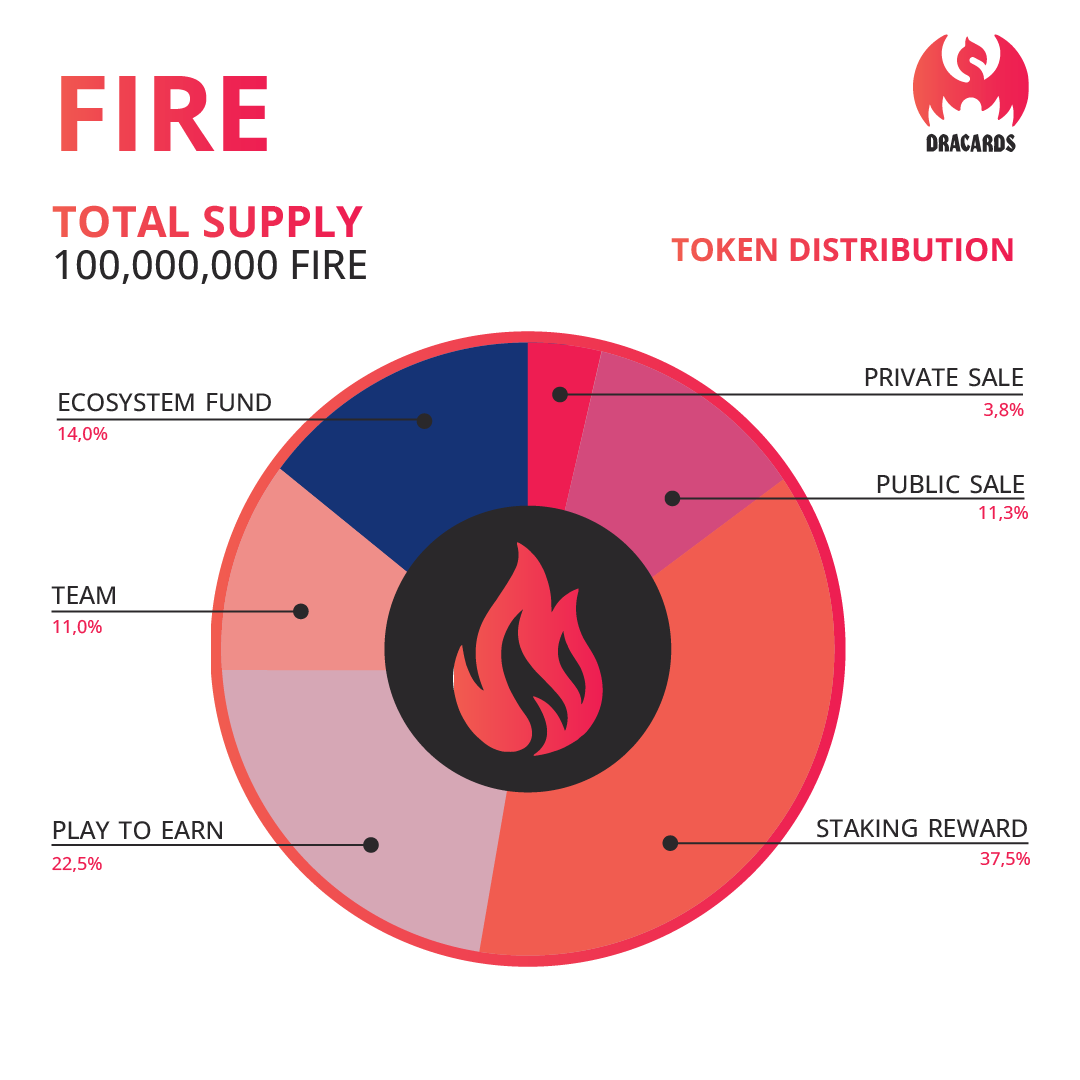 The chart above demonstrates the maximum possible available token of FIRE over the coming years, and it will reach no more than 100,000,000 total. There will be slightly fewer FIRE tokens than expected at launch.

Who Is The Team Behinds Dracards?

Dracards is a team of 11 people, including designers, programmers, and more. Their business background stems from both startup and corporate environments. They understand what it takes to deliver great results in both environments.

If you want to learn more about the team and their backgrounds, you can check it out here: https://bit.ly/3dNbhU3

Who Are The Partners Behinds Dracards?

Dracard’s first main partnership comes with MuesliSwap, one of the most emblematic DEX launched on Cardano. Dracards now has a special pool on Muesli where you can stake $MILK and earn $FIRE.

Their second partner is JPG.Store, the 3rd party marketplace they have chosen to work with. All of the Dracards assets are already listed there.

What was Dracards Release Date?

Dracards is planning to launch its PvE mode in Q3 2022, and PvP mode will be released later that same year. If you’re interested in learning more about Dracards, check out the website at https://dracards.com/.

Dracards game cards are already sold out. You can check and follow the collections at JPG.Store.

Dracards has a lot of potential. However, there are some really strong trading card games out there that it will have to compete with. If Dracards can keep their game fresh and up-to-date, it may well be the next big thing in the world of trading card games. The sky’s the limit for Dracards and we look forward to seeing what else they have in store for us in the future. The game will be released soon, but for now, you can follow them on their social media accounts below to stay up to date about the release date.

I hope you found something helpful in this post. Feel free to put some feedback below, I will be on the lookout for all comments and I am looking forward to hearing your thoughts about this game.