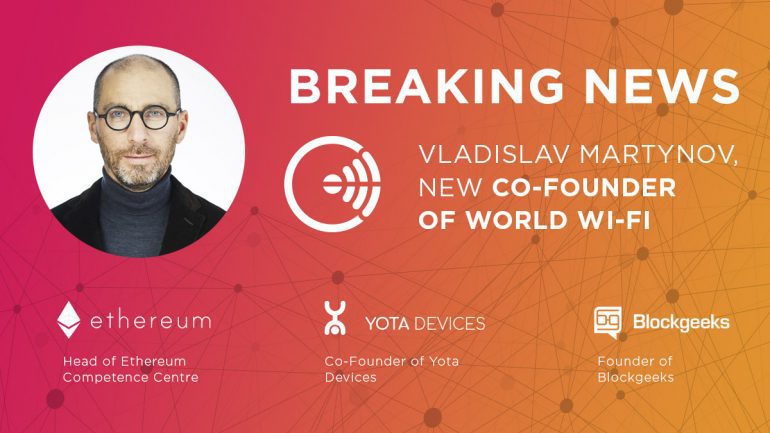 Head of Ethereum Competence Centre Vladislav Martynov has joined World Wi-Fi, a decentralized free Wi-Fi network, as a Co-Founder. His extensive experience and expertise in the blockchain industry will significantly strengthen World Wi-Fi’s position on the global market.

In Ethereum Martynov is responsible for developing the ecosystem around blockchain technologies and smart contracts. He is the one explaining to entrepreneurs and government officials why blockchain is needed, how to apply it and what prospects the transition to this technology entails. In 2016 Martynov became an advisor to the Ethereum Foundation. He is connected to Ethereum not only in the business sense, he maintains close friendly relations with the founder Vitalik Buterin and his father.His opinion is respected by leading industry experts because he is widely known as a successful entrepreneur with 25 years of experience in the field of digital technologies in international markets in a variety of technological projects. For example, Yota Devices (the manufacturer of YotaPhone) managed to vastly increase its presence on the market and achieve a capitalization of $154 million.

World Wi-Fi is based on an international network of routers, including domestic ones. Each router owner can distribute free Wi-Fi by giving guest access to other users and earning cryptocurrency. Registered users watch a short ad when they are connected to the Internet and then use it for free. In return, equipment owners earn cryptocurrency, which can be exchanged for any currency in the world. Advertisers reach their target audiences at an optimal cost. Using blockchain gives a new level of trust and transparency for all operations. Owners of almost any private router can connect to the platform and become a part of a decentralized Wi-Fi network.

World Wi-Fi TOKEN SALE is on the finish line – about $1 million left until reaching the hard cap. The tokensale of the decentralized Wi-Fi network is scheduled to run until 18 May 2018, meaning only 3 days left until the ICO is over. To date, World Wi-Fi has already raised more than $24 million, which is enough to implement full-scale coverage of all regions in the European Union, Asia, America and Australia, and in the future to deploy the World Wi-Fi network around the world. Over the next three years, World Wi-Fi intends to connect at least 20 million Wi-Fi routers to its global platform and reach an annual turnover of $1 billion.

To date, several preliminary agreements have been concluded with major advertising agencies, and orders for advertising campaigns keep coming. We continue to successfully conduct joint testings of our antennas with Internet providers. Last week the list of our partners was updated with yet another big company – we just finalized the agreement with Saudi-based PolarisNet to conduct the beta together. This week we signed a contract with Atma Inc – a Japanese investment company also well known as a crypto media agency CoinTokyo. We are planning to open an office in Tokyo for future growth and development of World Wi-Fi. We believe that the only way to develop free Wi-Fi network is true partnerships, and this is the very important step for the World Wi-Fi project in Japan and worldwide.