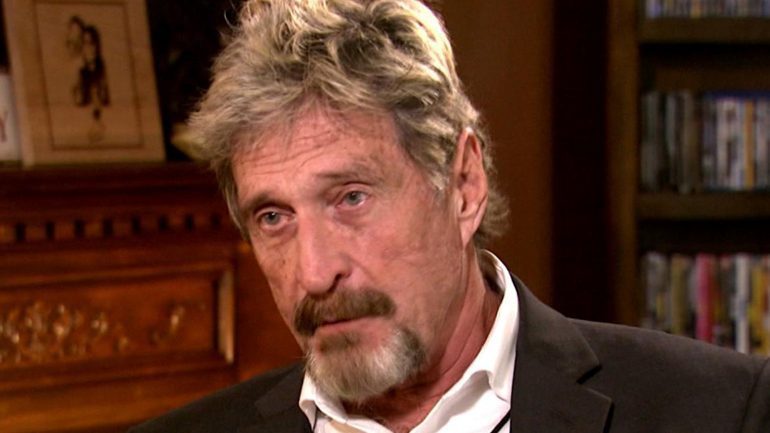 John McAfee is one of the most important figures in the cryptocurrency space. He is always giving comments about Initial Coin Offerings, virtual currencies and politics in general. This time, he spent two days at the Vidant Medical Center in North Carolina after being intoxicated on purpose.

On June the 22nd, McAfee wrote a Tweet in which he explains that he has been unconscious for two days.

He wrote about the situation he lived:

“I apologize for my three-day absence but I was unconscious for two days at the Vidant Medical Center in North Carolina and just woke up. My enemies maged [sic] to spike something that I infested. However, I am more difficult to kill than anyone can possibly imagine. I am back.”

I apologize for my three day absence but I was unconscious for two days at the Vidant Medical Center in North Carolina and just woke up. My enemies maged to spike something that i ingested. However, I am more difficult to kill than anyone can possibly imagine. I am back.

This is not the first time that McAfee is involved in such situations. Back in 2012, he has been accused of killing a person. After being caught in Guatemala, he spent there some time in prison. Indeed, he had some problems with cartels and similar criminal groups and is strongly armed in order to be protected.

But if the case was related to virtual currencies, why someone would try to kill him? Mr. McAfee has been trying to take virtual currencies to the mainstream and has recently launched his candidacy to be the next US President.

Before these three days without news from John McAfee he sent a tweet in which he said that due to SEC threats he will no longer work with ICOs or recommend them. The SEC has been searching the way to regulate Initial Coin Offerings and avoid scams that could harm investors. Moreover, the regulatory agency is trying to understand how to consider some important virtual currencies and ICOs.

The last week, the SEC determined that Bitcoin (BTC) and Ethereum (ETH) are not securities and do not follow securities laws in the country. But, at the same time, they believe that ICOs are unregistered securities operating illegally in the country.