Markets by TradingView
Home » Justin Sun Speaks at UDC: TRON Ecosystem Leads the Way to Web 3.0 with Its User Base Expectedly Growing to Compete with Ethereum Next Year

Justin Sun Speaks at UDC: TRON Ecosystem Leads the Way to Web 3.0 with Its User Base Expectedly Growing to Compete with Ethereum Next Year 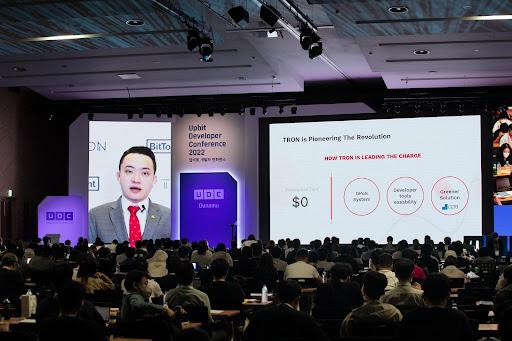 Sun delivered a keynote speech titled “TRON Leads the Way to Web 3.0” via video link, suggesting Web 3.0 makes us closer to a decentralized future. The TRON ecosystem is striving in multiple fields such as community, technology, and asset liquidity to democratize finance and foster a better environment for art, games, media, etc. in Web 3.0.

Sun began by emphasizing the possibilities that Web 3.0 holds. He believes that Web 3.0 can make a difference to the industry’s transparency, decentralization, scalability, as well as support for charity. Although Web 3.0 still needs to overcome obstacles including government regulation and the lack of public consensus, Sun is adamant that digitization is what will define the future. The scale of virtual assets has expanded exponentially over the past decade, and such rapid growth will not slow down in the future.

TRON has been witnessing 50 million accounts added every year, Sun noted. Based on that growth rate, it is expected that TRON will have a user base equal to that of Ethereum next year. In regards to the much anticipated USDD, Sun emphasized that it is the first over-collateralized decentralized stablecoin.

Hosted by Dunamu Inc., a well-known Korean fintech company, the UDC is reportedly the first Korean blockchain conference focusing on developers. First held in 2018, the UDC welcomed its 5th annual BPEX on September 22-23, 2022. This year’s theme “Imagine Your Blockchain Life” attracted dozens of leading figures in the blockchain industry to discuss NFT, Metaverse, DeFi, Web 3.0, and other trends in the space. Sun was invited to attend as the Founder of TRON, one of the top three public chains worldwide.

A sound ecosystem incorporating an underlying protocol, smart contracts, NFT, and metadata storage system has been built on TRON’s MainNet. It is one of the largest blockchain-based operating protocols for decentralized applications. As part of TRON’s global footprint, Sun’s attendance at UDC has attracted much attention and heated discussions. Many wonder whether this is a hint of TRON’s expansion into the South Korean market.

With the promising developments of the blockchain industry in South Korea in recent years, TRON has been keen on entering the market. In 2020, TRON partnered with Samsung to integrate with the Samsung blockchain keystore and enabled built-in blockchain wallets on Samsung mobile phones to support TRX, which is TRON’s native token. TRON participated in the NFT BUSAN 2021 conference, which was jointly hosted by the Busan Metropolitan Government and the Busan Blockchain Industry Association. Budlers NFT tokens, featuring a cartoon seagull, the Metropolitan’s mascot, were issued at the conference; TRON also donated $200,000 to the Busan Blockchain Industry Association to help build and expand the global blockchain ecosystem.

APENFT, the NFT Marketplace on TRON also spoke at the conference. Yuliana Bravo, APENFT’s Director for Global Business Relations, gave a speech titled “The Future of Decentralization of NFT: APENFT, TRON, and BitTorrent.” Bravo shared that the APENFT Marketplace is dedicated to turning the world’s top artworks into NFTs on the blockchain as a NFT platform based on TRON. It will take various measures to lead and promote crypto art in the era of Web 3.0.

TRON is dedicated to accelerating the decentralization of the internet via blockchain technology and decentralized applications (dApps). Founded in September 2017 by H.E. Justin Sun, the TRON network has continued to deliver impressive achievements since MainNet launch in May 2018. July 2018 also marked the ecosystem integration of BitTorrent, a pioneer in decentralized Web3 services boasting over 100 million monthly active users. The TRON network has gained incredible traction in recent years. As of August 2022, it has over 112 million total user accounts on the blockchain, more than 3.8 billion total transactions, and over $13.2 billion in total value locked (TVL), as reported on TRONSCAN. In addition, TRON hosts the largest circulating supply of USD Tether (USDT) stablecoin across the globe, overtaking USDT on Ethereum since April 2021. The TRON network completed full decentralization in December 2021 and is now a community-governed DAO. Most recently, the over-collateralized decentralized stablecoin USDD was launched on the TRON blockchain, backed by the first-ever crypto reserve for the blockchain industry – TRON DAO Reserve, marking TRON’s official entry into decentralized stablecoins.