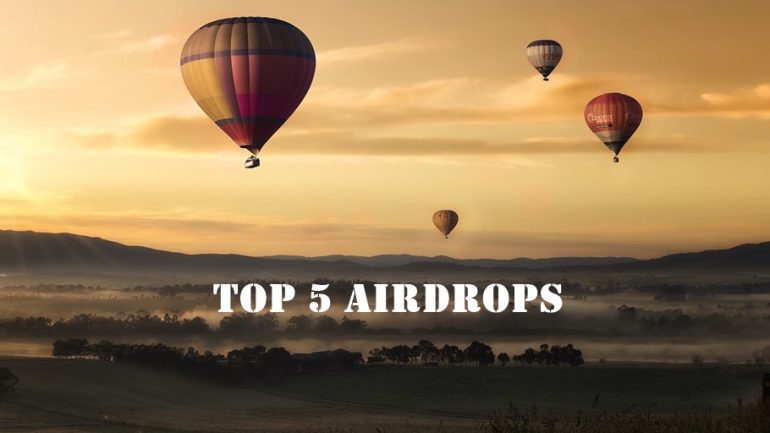 Most of the crypto community knows or has at least heard of the term “airdrop”.  An airdrop is when the creators of a blockchain project give away free cryptocurrency coins or platform tokens to its users if they meet their airdrop requirements.

To receive free coins, it is often required that you own a certain amount of the actual token or tokens of the platform and that they are stored in their designated wallet. Most airdrops also require that you subscribe, post or share something about them on social media platforms, but that varies from project to project.

Airdrop giveaways usually happen like this: at a precise date which will be announced, the project will take a snapshot of the blockchain, which will show the accounts and their balances at that moment. Token holders will then be given a certain quantity of coins/tokens as publicised. These airdrops are distributed on several blockchains, but Ethereum has most of the existing crypto projects based on its blockchain, and are known for organizing airdrops.

Hydro is a project developed by the Hydrogen company, a tech platform for developers and enterprises in the financial service, which was created to let private systems interact with a public blockchain.

This hybrid between private and public model allows financial services platforms to control the dynamics of a distributed, transparent, and unchallengeable public ledger. The project puts emphasis on certain areas where improvement is needed, such as validation, identity management, document security, transactions, and artificial intelligence.

Hydro completed their airdrop on February 16th, distributing a total of 2,632,330,741.57. The first 25,000 developers that participated during the roll-out period were eligible to receive a minimum of 222,222 HYDRO tokens. Unlike most projects, none of the existing HYDRO tokens can be purchased in a sale. This distribution of tokens is final, as the team declared they would not be holding any more airdrops.

Today is the day! Signups end tonight at 11:59PM EST, after that will begin with Distribution of the Token #Airdrop. #blockchain #fintech #developers https://t.co/i5NSLyFFun pic.twitter.com/wusMT8DeZj

Polymath is a blockchain based platform that aims to serve as an interface between traditional financial securities and blockchain technology. The coin and platform were designed to simplify the legal process of creating and selling security tokens. Their new government compliant token standard, ST20, can only be owned and held by a list of authorized investors.

The POLY Airdrop is officially complete!

A huge thank you to our community for participating and sharing all their wonderful messages with us. This is just the beginning…

Because of the unprecedented interest users displayed for the Polymath Airdrop (40,000+ applications from all over the world), they have greatly increased the amount of tokens that they initially planned on giving away.

To ensure that this airdrop ran fairly, they required that each participant complete a Know-Your-Customer and Anti-Money Laundering (KYC/AML) process. This way, they confirmed that only real Polymath platform users receive their tokens (instead of bots) which in turn allowed them to distribute a bigger amount to their investors.

Airdrop registration process ended on January 10, where early adopters were confirmed to receive POLY tokens. The amount of tokens an early adopter received during the airdrop was 250 POLY Tokens.

Decred (DCR) is a blockchain based platform that seeks to prioritize decentralized governance and to create a cryptocurrency that runs autonomously.

The airdrop started with the public announcement of Decred on December 15th, 2015 and the campaign ended on January 18th, 2016. In total, 3,244 applicants successfully completed the airdrop confirmation process by submittingDecred an address.

The airdrop sign-up was available for 34 days and participants from 99 different countries got involved in the process. Each successful participant received approximately 258.93958076 Decred when they introduced the seed they generated (and saved) into a wallet.

Verifications were also enforced to investigate similarity in IP addresses and e-mail addresses across entries – this process was done manually as well. While there is no evaluation system which is perfect, they made considerable efforts to pay each applicant as much time as possible.

However, to appease the community’s concern, the project decided to carry out another (and final) sweep of the database to verify its integrity and eliminate problematic applicants that were recognized as fraudulent. The result of this check showed that each successful participant received slightly more coins than specified – but no less than the intended amount of 258.93958076.

eBTC is an ERC20 compatible version of Bitcoin which was created on the Ethereum blockchain. The coin was created to combine the best features of the two top currencies, being capped at 21 million, compatible with smart contracts and having faster transaction times.

The sign up period for the $EBTC airdrop is over! Thank you to everyone who signed up, the tokens will be distributed tomorrow. #eBTC #ETH

Ontology (ONT) is a blockchain and distributed ledger network which is designed to host dApps and smart contract platforms.

On March 7, 2018, Ontology finalized their first airdrop to those that subscribed to their newsletter and attended NEO DevCon. People who subscribed to get the Ontology Newsletter in January of 2018 were airdropped 1,000 Ontology (ONT) tokens, and NEO DevCon attendees received 500 ONT tokens. ONT was worth around $10 at that time, according to Coinmarketcap.

For every NEO held, a 0.2 ONT token was airdropped to each NEO wallet. 0.1 ONT was made available instantly and the other 0.1 ONT was distributed when Ontology launched its mainnet. Ontology can be purchased from Binance exchange.

By distributing the tokens to the community, the ICOs and projects enable their crypto to enter into the next phase of development. Making altcoins more accessible to more people has always been a challenge, but airdrops campaigns seemingly make the process much easier.

Whether or not these holders will keep these tokens because they really believe in its potential or exchange them immediately on trading platforms remains to be seen.