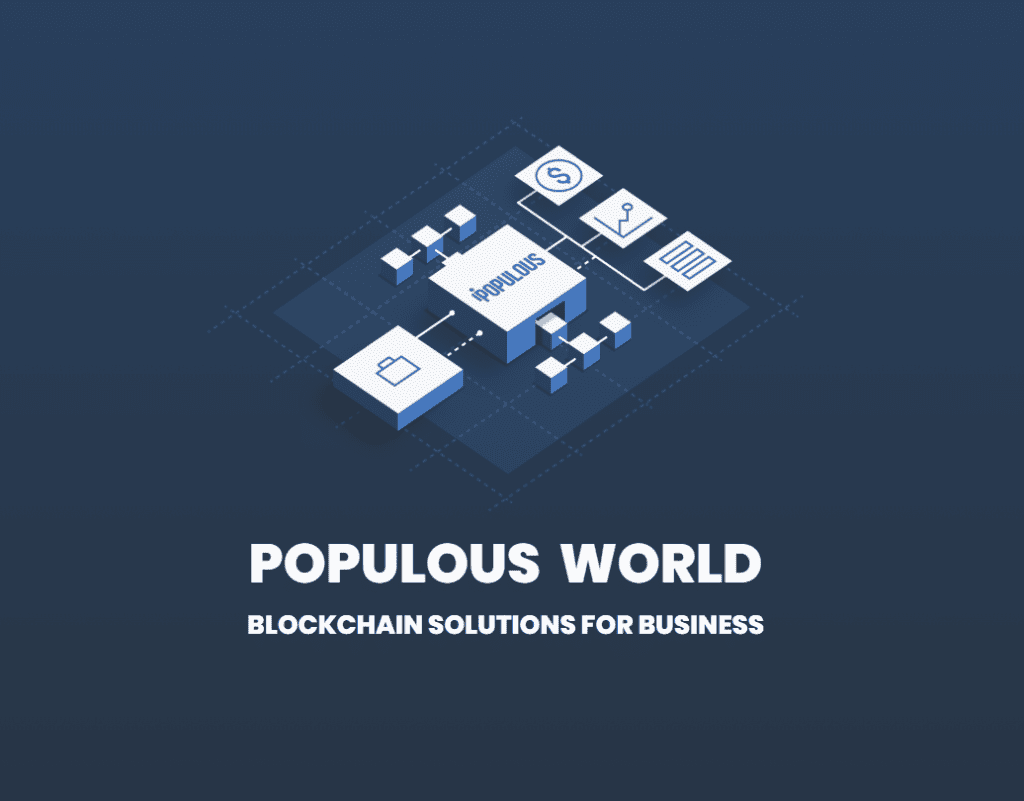 There’s a lot of evidence that suggests that blockchain will change the Internet as we know it, and most of the related services along with it. When it comes to invoice finance, Populous is already making quite the statement.

Populous (PPT) is a peer-to-peer (P2P) platform built on blockchain technology that provides small to medium-scale companies with a convenient way of taking part in invoice financing. It’s highly focused on transparency, security, and overall speed, and it uses proprietary smart contracts to pair sellers and lenders in order to help them perform transactions without the need of intermediaries or other third-parties.

How does Populous work

Populous makes use of blockchain technology combined with XBRL data, smart contracts, and various tokens, while also taking into account Altman Z-scores. The latter is a financial tool used to determine various risk factors for businesses. For example, it determines a business’ chances of facing bankruptcy in the following two years, the probability of it failing to meet its contractual obligations, and it provides an accurate measurement for financial distress.

By combining the public results from the Altman Z-score and the XBRL data, Populous has created a reliable credit rating system. This system helps Populous target companies in need of cash flow and disregard those that aren’t a good choice for the platform.

The platform’s main goal is to expand invoice financing to a global scale as well as to deliver powerful financial credit options to small or medium enterprises that want to sell invoices a lot faster than ever before. Up to now, Populous is still the only (and the first) invoice and trade finance platform based on the Ethereum blockchain. How to use Populous

Virtually anyone can sell and buy invoices through auctions on Populous. Users are first required to register their companies. The second step requires approval from a Populous administrator. If and when the administrator approves a seller, invoices can be submitted upon setting a minimum sales goal.

Generally, whether the administrator approves or rejects an invoice sales inquiry is in direct accordance with the Altman Formula credit score. If an invoice is approved, the auction begins and it will remain active for 24 hours.

The auction ends when a bid matches the sales goal within the designated 24-hour period, when the period in question passes and no bid meets the sales goal, or when users opt to terminate it early. In the case of the latter two options, users can either accept the best bid available or cancel the auction altogether. Additionally, the second option also provides users with the possibility of restarting the auction.

It’s worth noting that all the buyers who lost the auction will have their funds returned to them. The same goes in the case of canceled auctions. However, if the auction in question is successful, the seller receives the funds from the buyer in the form of Pokens. The Populous platform is based on the distribution of these Pokens. As mentioned before, the seller receives the funds from the buyer in the form of Pokens, which can be later exchanged for fiat currency.

Pokens are regarded as the internal currency of the platform; they are necessary for purchasing invoices. Each Poken is the equivalent of its fiat currency. For example, 1GBP Poken equals to 1 GPB. However, Populous does not solely rely on Pokens. The platform has two tokens: Pokens, and PPT, short for Populous Platform Token.

PPT tokens are mostly used as investment tools. These tokens can be used by anyone in order to invest in invoices. PPT tokens were distributed during the platform’s ICO back in July 2017, and only 53 million PPT will ever be in circulation.

Populous is a London-based project that is managed by Stephen Williams. Even though he is not a big name in the crypto industry, Williams is the original founder of Olympus Research, a company specialized in commercial data and enterprise-grade analytics. How to buy PPT

PPT is not the most popular token out there, hence, it can’t be purchased from as many sources as other large market cap cryptocurrencies. One of the main sources where the token is traded is EtherDelta. However, as of late, PPT can even be bought from the most popular exchanges out there such as Binance, OKEx, Kucoin, LATOKEN, Mercatox, HitBTC, and many others. A complete list of exchanges is available on CoinMarketCap.

Where to store PPT

Since both Pokens and PPTs are basically ERC-20 tokens, they can be transferred to and stored on an external, online Ethereum wallet. Privacy-oriented users who are looking for more security can opt for a hardware wallet instead.

Populous is a very ambitious project that currently has next to no competitors in the cryptosphere. The platform is aimed at businesses that require a faster way for their customers to pay invoices. The team managed to earn almost $10 million USD during the ICO, money that is sure to go into making Populous an even more comprehensive platform than it already is.

The biggest challenge for Populous is convincing potential clients to make the switch from traditional invoice financing services. The platform proposes a less expensive and faster way of trading invoices.

Considering just how popular invoice selling has become as of late, the platform’s development, and good management decision-making (the Luxure Global Citizen partnership is a good example), it wouldn’t be a surprise if Populous will become one of the all-time greats of this particular niche.