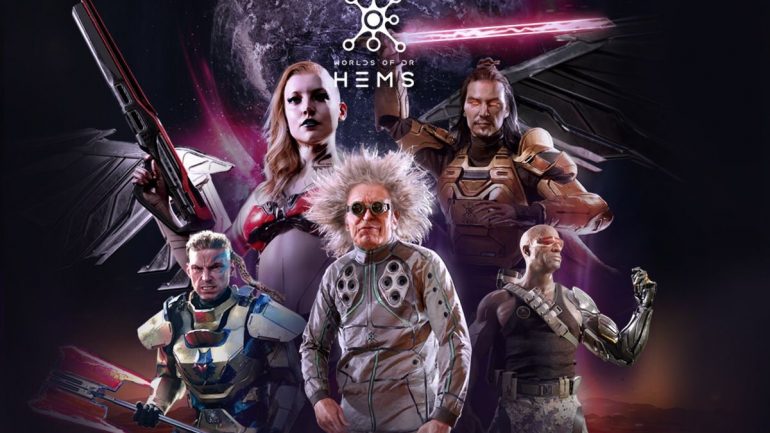 Worlds of Dr. Hems is a game running on the Wax Blockchain based on the “Play To Earn” model.

The story of “Worlds of Dr. Hems” takes place in the year 2155. After a great biological war on Earth, humanity is faced with hunger and death. Since all the countries of the world use biological weapons in biological warfare, the productivity of the lands on Earth has been destroyed. People kill each other for food and the world is in great chaos. The world has started to die and the only salvation of humanity is to go to other habitable planets. The atmosphere and habitat of planets close to Earth are not suitable for the survival of humanity.

For the salvation of humanity, it is necessary to go to favorable planets in other galaxies. But world states still have not found a definitive way to travel between galaxies. When all hopes begin to run out, a doctor named Hems shares his work on Fusion technology with the states of the world. Thanks to the work of Dr. Hems, humanity has the opportunity to travel between galaxies. The states of the world begin to plan for salvation under the leadership of Dr. Hems, and the preparation for the journey to the 7 planets suitable for humanity begins.

What are these planets and lands?

The 7 selected planets that allow humanity to continue its life are Nibiru, Hyper Boria, Sirius, Orion, Anteras, Agartha, and Shambhala. All of these planets have 500 land plots, in total 3500. And each of the planets has 12 different land types. All land types have different production effects depending on the seeds used on it.

Apart from these 7 planets, authorities are detecting another planet. But they realize that there is a different race living on this planet. The communication and reaction of this race with humanity will only emerge when it encounters humanity. Since not much information about this planet can be obtained from the Earth, this planet is called the Dark Planet.

The fate of humanity is in the hands of the players after this point. Players will produce on these 7 planets and ensure the survival of the human race. While doing this, they should also continue to develop in accordance with new living conditions. People should learn what to do in the face of any threat from the Dark Planet and improve themselves in this regard. Humanity is discovering new mines on these new planets that it travels to sustain its life. Thanks to the raw materials to be extracted from these mines, humanity will be able to develop new inventions and adapt more easily to the living conditions of the 7 planets, which will be their new living space. At the same time, it can provide more robust protection against the dangers that may come from the Dark Planet.

What do Players Expect?

Worlds of Dr. Hems game has two main modes that run parallel to the story; Production Mode and Dark Planet

About the Production Mode

In this episode, our players try to survive by planting seeds on different soil types on 7 planets. In order to do this production, they need to use Seeds, Avatars, and Tools. In this mode, players will earn $HEMS token, which is our in-game token, in exchange for their production. In addition, since the tools used for production will run out after a while, the “Crafting” part is one of the indispensable parts of the Production Mode so that the players can produce their own items.

At the beginning, game will start with 2 Planets, it means that only 1000 land plots will be sold. Land owners will get percentages (Hems token) from all productions on their land.

The raw materials to be extracted from the new mines discovered on these new planets that humanity travels to survive is one of the things that must be used to produce new tools. The limited number of mines discovered creates an advantage for people who first arrive on the planets. For this reason, those who will own these mines among our players will be able to use this advantageous situation in the game as long as they own the mine.

Mines will be the key assets as game has only 147 Mines. There will be three type of mines, and all planets will have 7 from each.

In preparation for this challenge, our players will have to develop themselves in Production Mode on 7 planets and start a clan and act together for some challenging processes in the Dark Planet. In Dark Planet mode, players will win as they fight.

Two tokens will be used in our game.

The in-game economy will be through the HEMS token on the WAX network.

HEMS Token will be 300 Million Max Supply and 50% will be in the form of GAME REWARD POOL.

There are plenty of burning on long-lasting REWARD POOL and the game economy balance which is the key element of OnChain Gaming.

Fees for filling the water level, in-game market fees, lucky wheel fee, early claim fees and many details in our game will not be transferred to the wallet of the game company, but directly to the Reward Pool Wallet. In this way, the game will remain active as long as possible.

The WODH Token will be in the BSC network as a Governance Token and will be used in the extra rewards of the DARK PLANET mode.
There will be weekly and seasonal rewards in the Dark Planet Battle mode. These will be distributed with WODH with the Oracle System running, and the supply of WODH max will be kept particularly low.

With two powerful tokenomics, we aim to keep the game unusually active for a long time.