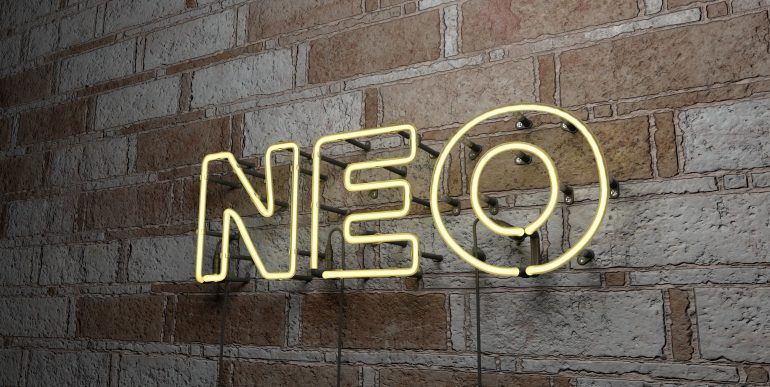 In this guide, we will be analysing what is NEO (NEO), how it works, which are its features and who is behind this interesting project in the cryptocurrency market. For those that do not know, NEO is among the top 20 cryptocurrency networks in the market and it has been operating for several years as of August 2019.

NEO is a platform utilizing distributed ledger technology for the creation of smart contracts and decentralized applications. The platform was previously known as Antshares and was the first open source blockchain in China.

This digital asset and blockchain network is also known as the Chinese Ethereum, since the network has closed many partnerships in the country and it has been working in the Chinese market since it was launched. That being said, NEO has been expanding all over the world and there are many projects in different countries around the world rather than just China, and this is something that the team is trying to improve.

Indeed, the founder of NEO, Da Hongfei mentioned that if users are comparing NEO to Bitcoin, they will realize that the first one is more centralized. The reason behind that is because this makes things much more efficient than running decentralized protocols.

NEO is also being embraced by the Chinese government, that had a very negative stance towards virtual currencies around the world. Nonetheless, this support received by China could legitimize the NEO platform.

Nevertheless, considering the latest results of this digital assets, more than legitimizing the network, the fact that they are closely working with China is a negative aspect for the digital currency.

NEO has four specific use cases. One, digital assets on the platform will have the protection of the law by employing virtual certificates.

Two, NEO aims at creating digital identities of organizations, persons, and information and employing multiple factors to authenticate access. Such as fingerprints, facial and voice recognition among others.

Three, the platform will accommodate various programming languages in the development of smart contracts. The Neo Virtual Machine (NeoVM) allows for precise scaling and concurrency.

Four, the NEO blockchain is focused on the development of decentralized applications such as decentralized cryptocurrency exchanges and Artificial Intelligence-supported legal smart contracts.

NEO works in a similar way to Ethereum, considering that it allows developers to release their own decentralized applications on top of its network and it has its own ecosystem in which different apps and companies interact and connect to each other.

How The Two Native Tokens On The NEO Platform Function

The NEO platform has two native virtual currency tokens, NEO and GAS. The two tokens differ significantly in their usage.

The NEO token forms the investment aspect on the NEO platform. The token is a hard cap of 100 million tokens which can be used for network management and changes. However, the NEO token, unlike other virtual currencies, like Bitcoin, cannot be subdivided into smaller units.

It’s because the platform developers view the NEO token as a share which can only be a whole number. For example, if one NEO token costs $100, you have to have $100 to purchase one NEO token. But with other coins like Bitcoin, if one Bitcoin cost $100 and you only have $20, you can buy a fraction of the currency.

The GAS token can be subdivided into smaller units and is used to fuel operations such as running decentralized applications among other activities on the NEO blockchain.

The platform was born in 2014 as AntShares. Its founders were Da Hongfei and Erik Zhang who later became the founders of OnChain. On June 2017, AntShares changed to NEO.

Early this year, NEO’s founding company, OnChain, supplied another token, Ontology (ONT), which it indicated can be used as a voting power when the NEO blockchain needs to be upgraded or to solve management issues on the platform. Each ONT token was exchanged for five NEO tokens.

During the creation of the genesis block, 100,000,000 NEO tokens were created with 50 percent being sold to investors. 15 million of the remaining 50,000,000 will be released from a smart contract each year to support developments on the platform.

For the consensus algorithm, the NEO blockchain uses a delegated Byzantine Fault Tolerance algorithm which is capable of accommodating 10 thousand transactions per second. By using this type of algorithm, the NEO platform cannot be split into two different chains or forked.

With the delegated Byzantine Fault Tolerance consensus algorithm, the platform has no specific nodes used for validating transactions. The nodes are randomly selected.

NEO has partnered with ADEx to create the first decentralized application on the platform. A research sharing platform powered by the NEO blockchain is also in the pipeline.

NEO is also home to NEST, a smart fund utilizing smart contracts on the NEO platform. The smart fund seeks to eliminate the risks and inefficiencies inherent in traditional fund intermediaries.

Qlink is another project utilizing the power of the NEO platform to decentralize the mobile network. The project aims at enabling the renting of network bandwidth and being rewarded with QLC tokens.

The smart economy nature of the NEO blockchain has enabled the protection of creative works through a project called Zeepin.

NEO  3.0 is an update that the network will be experiencing in which some features will be changing or receiving an enhancement. The goal behind it is to be able to implement performance and stability improvements using the old blockchain network was not possible.

With these improvements, NEO will be ready to work as a commercial network that would support many different applications from companies and retail users. The goal is to release this network as soon as the second quarter of 2020.

One of the main features of NEO 3.0 is related to the Delegated Byzantine Fault Tolerance (dBFT). In dBFT 2.0 the goal is to offer new recovery mechanisms that would improve the overall stability of the current dBFT consensus algorithm. That means that if there is a network or node failure, it would be possible to do a quick recovery.

Moreover, there is going to be a new pricing model. At the moment, it is very expensive to run and deploy a smart contract on the NEO network, which leads to a reluctance in smart contract usage and development. In NEO 3.0, the team behind NEO is going to address the issue by reducing the deployment and execution costs for smart contracts and expand the app scenarios for gas and increasing the number of decentralized apps.

In addition to it, NEO 3.0 will also have a built-in oracle implementation that would allow smart contracts to access Internet resources during execution times. Developers will have the possibility to develop sophisticated oracles based on NEO.

Furthermore, the NeoVM will be a lightweight virtual machine that would help developers execute different smart contracts. The main feature of the NeoVM is that it would have a very low resource consumption. It would also support different programming languages to include as many developers as possible on the network.

The new NEO 3.0 update will have a new distributed decentralized object storage platform called NeoFS. This platform is going to be used by different dApps for data storage and also as a Content Delivery Network.

This new NeoFS solution will contain a scalable data placement method as well. The platform will also be using a zero-knowledge data validation method that is based on homomorphic hashing that would have a positive effect minimizing computational costs.

Finally, one of the most interesting features that the network will include is the NeoID, a digital identity that is related to individuals, organizations and other entities that would exist only in an electronic form. This NeoID solution is going to be backed on the NEO platform and it allows those using it to have better control of their identities and deliver a higher degree of trust and security to the whole smart economy.

The team behind NEO started working on these new updates in the last quarter of 2018 and it is expected to be completed before the second half of 2020. It is worth pointing out that the migration of dApps and users from NEO 2.x to NEO 3.0 is inevitable. In the future, there may be an early adopter incentive plan to attract a larger number of users to the new NEO 3.0 platform.

After that massive performance, NEO dropped down to $5.85 per coin in January this year. That represents a price decline of over 96%. Just a few days ago, NEO reached its lowest point in terms of BTC in many years, reaching 0.000869 BTC.

At the time of writing this article, NEO is the 20th largest digital asset in the market with a market capitalization of $666 million and a price per coin of $9.44. If you want to purchase a NEO coin for BTC you will have to pay 0.000947, as reported by CoinMarketCap.

This is why it will be very important for NEO to release the new version of its network, attract more users and help the digital currency recover from the bear market that affected the industry in 2018 and altcoins in 2019.

Where Can I Buy NEO?

Nevertheless, one of the best platforms to acquire NEO is Binance, one of the largest exchanges in the world in terms of trading volume. It is very easy to purchase NEO using Binance. The crypto exchange offers 7 different trading pairs, including NEO/BNB, NEO/BTC, NEO/ETH, NEO/PAX, NEO/TUSD, NEO/USDC and NEO/USDT.

Despite the fact that Binance accounts for just 1.3% of all NEO trading volume in the space, this platform allows users to purchase some cryptocurrencies using a credit card. In this way, it would be possible for them to exchange these funds for NEO in the marketplace.

Other exchanges include CoinBene, DragonEX, LBank, IDCM, EXX, Bibox and BitMart, among others.

How Does Gas Work?

One of the main differences with other cryptocurrencies in the market is that NEO works with two different tokens. We have analyzed what the NEO coin is and how it works, but we have not seen how GAS behaves. GAS coins allow users and individuals on the NEO network to be able to use the blockchain.

While the NEO token cannot be divided, GAS can be partitioned into smaller fractions. GAS is generated at a rate of 8 GAS per block and this rate of production will be reduced by 1 token every 2 million blocks, meaning that before 2040, all the GAS tokens will be created, reaching 100 million.

GAS dividends are paid to users that stake NEO. This virtual currency can also be used to pay for fees and smart contracts.

GAS had very fluctuating prices over the last few years. Indeed, the virtual currency surged above $95 in January 2018. In terms of BTC, it reached an all-time high of 0.0089 BTC in August 2017. This digital asset is currently being traded close to its lowest point in over 2 years.

According to CoinMarketCap, GAS is currently the 171st largest crypto with a valuation of $15 million. Each Gas can be purchased for $1.57.

It is possible to exchange this virtual currency on DragonEX, P2PB2B, BKEX, Huobi Global and BitMax, among other platforms.

Users that hold NEO tokens will be generating GAS automatically as more blocks are generated on the network. There is a difference between the rewards that users receive on the Bitcoin blockchain and those using the NEO digital asset. While Bitcoin miners receive the BTC coins, NEO stakers receive GAS that has a totally different price compared to NEO.

If you want to know more about NEO, you can read our latest news roundup related to the NEO crypto ecosystem.

For those interested in NEO from the investment side, you’ll want to direct your attention to our NEO price prediction and technical analysis guide (always do your own research before investing). If you’re ready to buy or trade for NEO you can follow our guide on buying through Binance (recommended), or use this guide for the Bittrex exchange.