The percentage of Segregated Witness (SegWit) transactions on the Bitcoin (BTC) network continue to expand. 50.73% of Bitcoin payments have been made through SegWit enabled addresses. This is according to data provided by Transactionfee, a website with information related to Bitcoin fees.

Bitcoin SegWit payments continue to grow on a monthly basis. This shows the industry is moving into faster and cheaper Bitcoin payments that would help the whole network perform smoother.

Segregated Witness is an implementation that helps reduce the size of the transactions. This would ultimately have a positive effect on the number of transactions processed per block. Bitcoin has 1 MB blocks that allow it to perform between three to seven transactions per second.

According to transactionfee, a transaction that spends one or more SegWit outputs is considered to be SegWit. In order to gather data, they aggregate the payments from SegWit transactions per day and compare them to the number of total payments per day, which gives an idea of the percentage of SegWit-spending payments.

Taking into account 365 days rolling average, the number of SegWit Transactions continues to grow but not at the same pace as before. 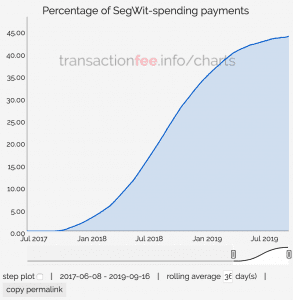 This shows that during 2018, the adoption of SegWit moved from under 5% of the total number of transactions to almost 35% at the end of December 2018. Nowadays, the 365 days rolling average is 43.73% the highest point ever recorded.

Nevertheless, the curve of adoption seemed to have flattened this year, specifically during the last months. At the same time, the number of transactions per day dropped after June, when the price of the most popular digital asset fell from $13,750 to under $10,000 for several days.

Although Segregated Witness is not the ultimate solution to deal with Bitcoin’s scalability issues, it is helping reduce congestion in the Bitcoin blockchain. The Lightning Network (LN) is expected to be allowing Bitcoin to process thousands of transactions per second without having to congest the main Bitcoin network.

At the time of writing this article, Bitcoin is being traded around $10,200 and it has a market capitalization of $183 billion, according to CoinMarketCap.

In the future, with more SegWit payments and a large number of transactions processed through the LN, Bitcoin is expected to become a more competitive digital asset to process transactions. Developers are currently working in order to be able to release the LN to the market as soon as possible.