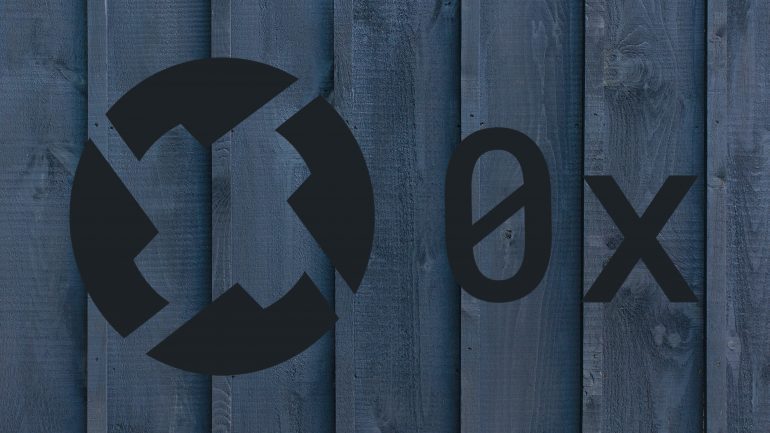 [This article has been updated on October 18, 2018—especially to reflect 0x’s Coinbase listing]

Founded in October of 2016, 0x was created with the purpose of enabling anyone to trade freely any type of asset and to let any user operate a decentralized exchange.

The Technologies Behind 0x

Multiple of decentralized exchanges make use of smart contracts that run on the Ethereum blockchain. This means that the orders and trades occur in these smart contracts, and users can always access their funds, rather than entrusting them to a third party.

It also means that every time traders want to access their funds, they have to make transactions on the blockchain, regardless if it’s for depositing funds into an exchange’s smart contract or for placing an order. This costs Gas, an internal fee required by the Ethereum ecosystem to make sure that these transactions are managed on the blockchain by its miners.

If you were to use Ether Delta, for instance, you’d pay a Gas fee every time you wanted to deposit funds into the exchange’s smart contract to make an order, and you’d pay another Gas fee to execute that trade once your order is filled.

Decentralized exchanges have great security benefits, but they experience high operation costs and a lack of accessibility. The 0x protocol aims to improve decentralized exchanges by combining off-chain ordering relays with on-chain payments. This allows users to transmit an order off-chain in order to be completed by another user.

Only value transfers happen on-chain, while other trading commands are left to be handled by off-chain procedures. Therefore, the network runs transactions only when a trade is performed, enabling users to enjoy reduced Gas fees while trading. 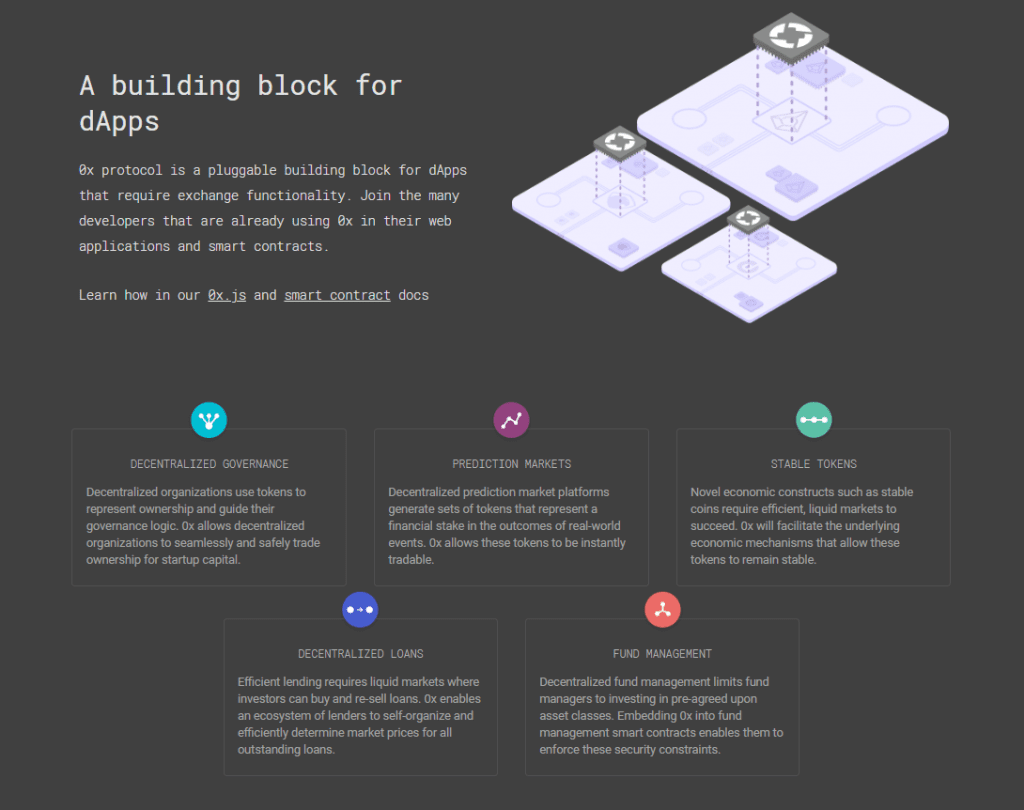 To achieve this, 0x makes use of “relayers.”  Relayers distribute orders via public or private order books. They bring capital to the network by hosting its order books, acting as an exchange. However, a relayer cannot perform a trade. It can only enable trading by offering maker orders sent to the network. In order for a trade to be fully completed, a taker must complete the order by sending his and the maker’s signatures to the smart contract of the decentralized exchange. For every transaction, a relayer requests a fee in 0x’s native currency, ZRX.

Relayer-processed trades are known as “Broadcast Orders”.  Broadcast orders let anyone broadcast an order to the network.

0x also integrates “Point-to-Point Orders,” which are orders that have been sent to a specific taker. These orders let two users transfer funds through a variety of online means, including emails, messengers, and more.  When a maker sends an order this way, just the designated taker’s address can fulfill it, thus securing funds from potentially malevolent third parties.

0x’s smart contracts are open source and can be accessed at any time by the public. This allows developers to create new applications using the 0x protocol if they require an exchange function for their token or platform. The protocol acts as a plug-in for other Ethereum-based dApps. Its application agnosticism and shared protocol layer also enable dApps to be interoperable, building a “shared infrastructure for a variety of [applications].”

A Token Registry Contract will be used to store a number of ERC20 tokens with “associated metadata for each token: name, symbol, contract address, and the number of decimal places needed to represent a token’s smallest unit.” The registry will act as an official on-chain reference that will enable market contributors to independently verify token addresses and exchange rates before performing a trade.

Despite helping users reduce costs while transacting funds, it is possible for a company that worked with 0x to charge fees for the services provided. With 0x and its standard protocol, it is possible to speed up the process of exchanging digital assets and reduce the fees paid by users.

According to 0x’s official site, there are more than 30 projects working with 0x and searching for different solutions through this protocol.

0x wants to create the infrastructure for the emerging cryptocurrency economy and enable markets to be created where it was not possible before.

Their official site reads as follows:

“As more assets become tokenized, public blockchains provide the opportunity to establish a new financial stack that is more efficient, transparent, and equitable than any system in the past.”

0x’s own Ethereum token (ZRX) is used for paying trading fees to Relayers for their services. The main use for ZRX is to offer decentralized control over 0x protocol’s upgrade system, meaning that ZRX owners have the authority (proportional to their holdings) to say how the protocol should be developed over time.

0x stakeholders are responsible for administering the protocol. They’re also the ones who have to add, modify, and remove data when required. Token owners can also use the currency to vote on decisions that concern the blockchain, such as protocol additions and upgrades, without disrupting the network’s functionality.

After it reached $0.50 right after the end of its ICO, ZRX slowly decreased to ~$0.20 where it stayed all through September. The value stayed the same during October and November, a period when most altcoins were growing.

On May 10, 0x reached its all-time high of $2.01 USD. As of October, it is trading just below 90 cents, a boon in price after its Coinbase listing.

On August 29, 2019, ZRX is the 60th largest cryptocurrency in the market in terms of valuation. Each ZRX coin can be purchased for $0.15. This shows that although 2019 was a good year for Bitcoin, other virtual currencies didn’t behave as expected. Indeed, Bitcoin’s market dominance surpassed 69% in the last 24 hours. This is the lowest price ever reached by this virtual currency since it was released to the market.

Although the price of 0x continues falling, many other Initial Coin Offerings and projects in the cryptocurrency market are experiencing a similar situation. The whole altcoin market is down in terms of BTC and it may take a while before it recovers from the current situation.

Where to Buy ZRX

ZRX can be traded on some of the most popular exchanges—which includes Coinbase as of October 018. It is listed on several major exchanges such as Binance, OKEx, and Bittrex.

The token can be traded for Bitcoin, Ethereum, and even for USD, and USDT. Most of the trading volume comes from Binance and OKEx.

One of the best platforms to purchase ZRX is Binance. According to CoinMarketCap, Binance is the third-largest exchange in terms of trading volume in the last 24 hours. The platform offers 4 different trading pairs for ZRX, including ZRX/USDT, ZRX/ETH, ZRX/BTC and ZRX/BNB. All these trading pairs account for 0.05% of all the trading volume on the platform.

In order to purchase ZRX on Binance, users will have to buy other digital assets, including USDT, Ethereum (ETH), Bitcoin (BTC) or Binance Coin (BNB). In order to do so, Binance has released a new service that helps individuals make credit card purchases and receive BTC, ETH, LTC or BNB coins, among others. Once the funds are added to your account, you can exchange them for ZRX coins.

The only downside of trading ZRX on Binance is that despite being one of the exchanges with the largest volumes in the space for altcoins, there are other platforms with more liquidity for ZRX. For example, Coinbase Pro, one of the largest exchanges around the world, has three different trading pairs with ZRX: ZRX/USD, ZRX/EUR, ZRX/BTC. These three trading pairs account for 0.35% of the total trading volume of the Coinbase exchange.

That means that Coinbase accounts for over 12% of the total ZRX trading volume, compared to 5.82% from Binance. Coinbase users can simply deposit funds through different methods and purchase ZRX tokens.

These two platforms are recognized in the cryptocurrency market for being two of the most secure and simple to use.

Where to Store ZRX

As mentioned before, ZRX is an ERC20-based token, so any Ethereum-compatible wallet will support 0x.

One of the most popular wallets to store ZRX tokens is Guarda. Guarda is a multi-currency, multi-platform and non-custodial wallet that allows users to hold, send, receive and exchange digital currencies in a fast and easy way.

This wallet is good for newcomers because it offers web services, a Google Chrome extension, a desktop application or a smartphone app. In addition to it, a large number of currencies supported would help ZRX holders to deal with their portfolios in a faster and easier way.

As mentioned before, all ERC-20 compliant wallets would be able to hold ZRX tokens. Nevertheless, it is always very important to be sure that the funds are being sent to a correct address because they could get lost.

Holding ZRX in an exchange is not the best thing to do. Cryptocurrency exchanges have been affected by different attacks and hacks throughout the last few years and users have lost part or all of their digital assets because of these issues. The best thing to do is to store ZRX in non-custodial wallets that are not connected to the internet.

There are other wallets in the cryptocurrency market that would help you store your ZRX tokens in a safe and easy way.

This cryptocurrency project was co-founded by Will Warren and Amir Bandeali. Warren is also the CEO of the platform while Bandeali is the CTO. Mr. Warren was previously applied physics research at Los Alamos National Laboratory, while Bandeali worked as a fixed income trader at DRW. He has also studied Finance at the University of Illinois.

Other individuals working on this project include Alex Xu, the Director of Operations, Ben Burns, designer, Leonid Logvinov, Engineer, and Philippe Castonguay.

Thanks to its smart protocol, 0x merges the benefits of both centralized and decentralized exchanges while getting rid of their problems. Off-chain order relayers enable the low-cost operations centralized exchanges offer. The on-chain payment settlements let users get the benefits of decentralized trading. Both processes are run through smart contracts that heighten the security. Given the advantages that 0x presents, it is very possible that this project will gather many interested investors.