(Updated August 1, 2021)Ethereum will hit half a decade this coming July since launch, and if everything goes well, it will initiate its transition to ETH 2.0, which will solve scalability issues. That will be quite remarkable for the platform that brought smart contracts and dapps to the blockchain. Progress on its development will rally its huge community, and this will have a positive effect on its price, which has underperformed over the past two years. So far, we see evidence of positive momentum in 2020 as several factors conjure to spur ETH price.

In this Ethereum price prediction, we are going to analyze the latest news and developments, price history and evolution over the past two years, and TradingView charts as we try to find out why Ethereum price is likely to break past $300 by the end of the year. Also, we will include some expert predictions on why this is a bullish year for ETH.

Notable Ethereum news & Plans for 2021 and above

In a tweet made last month, Vitalik Buterin shared his vision and personal roadmap for ETH 2.0 development. The tweet covers the next five to ten years of the project development.

The Ethereum cofounder emphasized that research and development would go on despite recent challenges. According to him, moving forward, there should be less fear of complexity with the system update as the upcoming changes should address previous issues.

“The “quadratic sharding as the end of history” approach ensures there will not need to be a further upgrade as large as the eth1 -> eth2 one; rather, from eth2 onwards, things will be much more incremental.”

Reflecting on the last two years of Etherum’s development, he added that:

“In general, over the last ~2 years, there has been a solid shift from “blue sky” research, trying to understand what is possible, to concrete research and development, trying to optimize specific primitives that we know are implementable and implement them.”

Earlier last month, Vitalik speaking to a crypto media publication noted that Ethereum’s main goal for the year was to launch Phase 0 of ETH 2.0. after this, ETH 2.0 will begin as independent proof of stake network.

Vitalik’s comments on the progress came just a month after Justin Drake, an Ethereum 2.0 researcher, informed the public via Reddit that they planned to upgrade the network on its ‘fifth anniversary, July 30, 2020.’ The assurance from Vitalik and developers has aided ETH price as the coin is 31% up since the beginning of the year.

According to Sharan Nair, the chief business officer at CoinSwithch.co and CRUXPay, “Investors likely bought into the promise of ETH 2.0, which is said to scale the Ethereum blockchain significantly,” Also, some investors may have snapped up coins for staking after the protocol upgrade.”

Ethereum Price Is Getting A Boost From Growth of DeFi

Data from DefiPulse indicates that the decentralized finance (DeFi) space exploded in 2019. The total value locked (TVL) in protocols rose from $320 million to over $670 million. 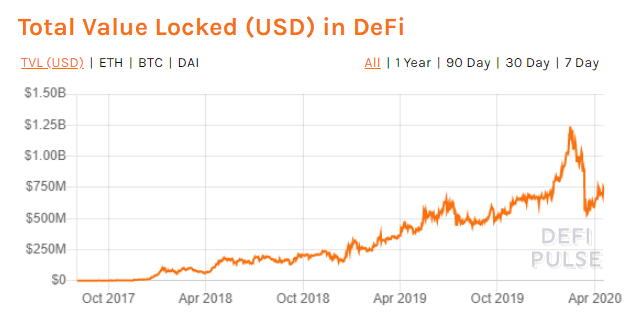 And on February 15, the TVL rose further to a record high of $1.219 billion. According to Nair, “the numbers tell us that investors see DeFi to be truly disruptive and believe it can replace traditional finance, leading to increased accumulation of ether.”

MakerDAO, a lending platform, is currently the largest DeFi project with a 49.81% dominance. Most of the popular projects on the list are based on Ethereum’s blockchain, and this explains why we are witnessing the growth of the ETH price alongside that of DeFi. 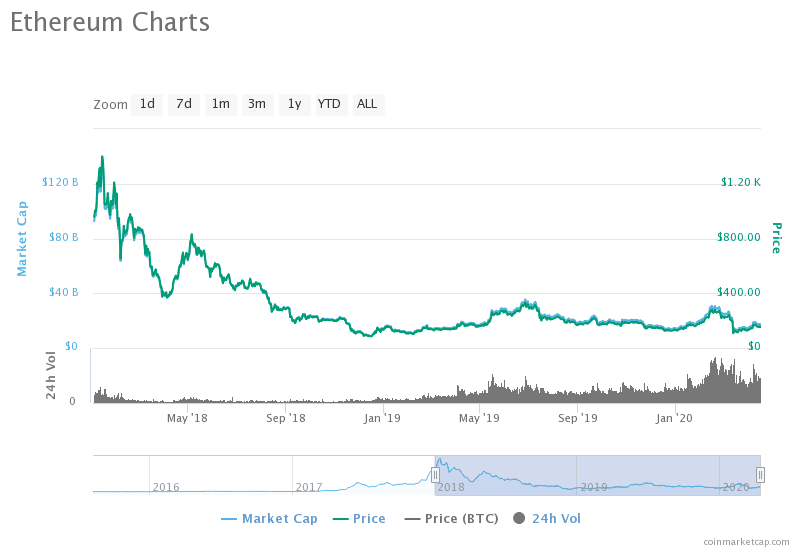 The beginning of 2018 saw Ethereum peak in price achieving its all-time high on January 14 of $1,400. However, that is as good as it got as a steady decline set on with high price volatility throughout the year. By April 5, 2018, the price had dropped to $370 before doubling to $790 by May 5th same period. But, that would be the last time the ETH price would see such highs as a steady decline set on which saw the coin end the year at $137. (Calculate the %)

2019 was a more consistent year for Ethereum even though there were the price fluctuations, which is common in crypto; they were quite minimal. The price managed to hold between $130 to $300 throughout the year, with a peak of $332 being achieved on June 27, 2019.

With the period Ethereum lost and reclaimed the second position on market capitalization from XRP.

Looking at Google trends, we see Ethereum experienced peak interest in 2019 between May and July. There was a spike of interest between May 5 – 11, Jun 9 -15, and the most interest was registered June 30 – July 6. The interest coincides with the price peak for the year before a sharp decline of interest on July 21-27.

Since then, interest maintained an even level until Jan 26-1 Feb. it would peak between Feb 9-15 right about when we saw Ethereum record its highest price for the year.

Looking at the numbers, it’s clear there is more interest in Ethereum this year compared to last year within the same time frame. 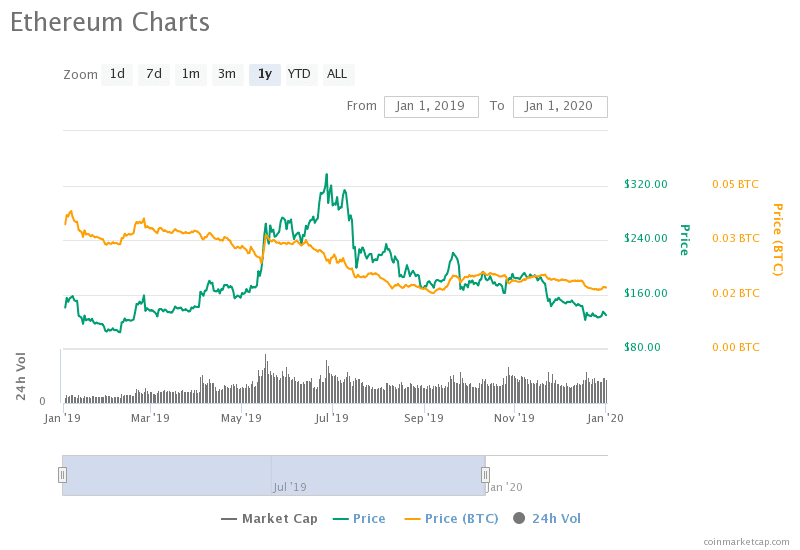 The price of Ethereum was less volatile in 2019 compared to the previous year. It managed to remain with the $100 – $330 range throughout the year. ETH began the year at $140 before dropping to $104 on February 7, which marked the lowest mark the price hit. From there was a steady rise coupled with minimal decreases culminating to a peak of $336 on June 27. But that is as high as it got for ETH in 2019. Since then, there was a steady decline to the $200 zone where it held for a few weeks before dropping below $190 by August 15. The price would temporarily revisit the $200 territory between September 20 -September 24 before sharply dropping to the $160 zone. From there were minor increases and decreases with ETH ending the year at $132

For this Ethereum expert, the virtual currency could be moving towards the $3,000 region in the near future. ETH is now at a very important price level close to $2,400 considering that this is where ETH finds large resistance but also support.

It is also worth noting that this virtual currency as well as all the others depend on the entire market direction, which is usually led by Bitcoin.

The second-largest cryptocurrency in the world has recently printed an inverted C&H that is a bearish pattern. However, the traditional cup and handle pattern is extremely bullish. This pattern could be activated as soon as the candle closes below the neckline at around $1,700. If that happens, then we could see Ethereum falling even lower.

For the ETH/USDT trading pair, we see that for this virtual currency there has been a continued bearish movement for ETH with a strong downward resistance that could break before any significant breakout would occur. At the same time, the expert shows that there is support close to $1.7k and mild support at around $1.9k.

In addition to it, there is a head and shoulders pattern on the 1.hour. This could be very important in order to battle the $2050 support. However, the analyst considers that ETH could move downwards to $1.9k first and $1.7k then.

The ETH/USDT trading pair shows that ETH is currently in a logarithmic ascending channel that shows establishing bulls flag that will pass between $1,900 and $1,888. This would be the most “low risk to enter the market” for long term investors.

At the same time, they explain that it might be hard to see Ethereum breaking from the channel. The analyst is also showing that the best possible solution for Ethereum is for it to land close to the 200D EAM’s line.

It is also clear that Ethereum, as well as Bitcoin, tend to trade in tandem. This is why we should closely follow their relationship and how they behave.

For this ETH/USD analyst, we are currently in a range that is clearly shown in the chart. As he explains, it is certainly a bad idea to open a position when the price is in the middle of that range. This is due to the reason that the stop-loss is big. The best way is to wait for the correct moment when the digital currency will be near the low border or the higher border.

In this way, we could open the stop loss close to the range but not so far away. If the coin does not move in the direction we were waiting for, then our stop loss would protect our capital and position.

Coinswitch believes 2020 will be a remarkable year for Ethereum and the rest of the crypto market. The price can go as high as $1600 by the end of the year since the see dapps experiencing massive adoption within the course of the year.

Brian Schuster, the founder of Ark Capital LLC, is quite bullish on the price of ETH in the longterm. He sees the coin reaching as high as $100,000 in five years, given that crypto will replace gold.

TieuLong FX, a forex trader, believes that Ethereum could reach $1,365 by the end of the year.

According to PriReis, a respected analyst on the trading view, Ethereum could end the year at $320, which is quite realistic.

Moving from a realistic to a more unrealistic prediction, we have Nigel Green, CEO of deVere Group, who believes Ethereum could end the year at $2,500. He sees the increasing use of smart contracts, increased demand for cryptocurrencies, and the decentralization of cloud computing as the chief drivers of the price.

When Was Ethereum Launched?

The Ethereum whitepaper was released in 2013 and described a new open-source protocol meant for creating decentralized applications. In July 2014, a crowd sale was held where 60 million tokens were sold. The platform was launched a year later on July 30, 2015.

Ethereum is a decentralized open-source and distributed computing platform that allows for the creation of decentralized applications, also known as dapps and smart contracts.

Is Ethereum Proof of Stake?

As of April 2020, Ethereum uses proof of work (PoW) consensus even though on Jul.30, 2020, the first phase of transitioning the network to proof of stake (PoS) will be launched.

Is Ethereum a Good Investment?

There is a reason Ethereum is the second largest currency by market capitalization. With scalability upgrades on the way and the growth of the DeFi space, we can confidently expect the price of ETH to grow in the future; thus, it would be shrewd to put your money on this project.

Will Ethereum go up?

Yes, expect the value of ETH to go up in 2020 and the years that follow based on the many exciting developments taking place and as cryptocurrencies gain mass popularity.

Where to buy Ethereum?

There are many ways to buy Ethereum, including using a debit or credit card on crypto exchanges like Coinbase, Coinmama, Bitpanda, and CEX.io. You can also buy ETH using a bank account or transfer on Coinbase, Bitpanda, Kraken, Gemini, Bitstamp, and CEX.io. There is the option of buying Ethereum using a Bitcoin or exchanging BTC for ETH on exchanges like Binance, Changelly, and Coinbase Pro.

There is no easy way to buy Ethereum using PayPal, but you can buy Bitcoin using PayPal on platforms like LocalBitcoins and exchange them for ETH.

However, remember before embarking on buying Ethereum, you need a good and safe place to store your coins. Therefore, it wouldn’t hurt getting your hands on a hardware wallet like Ledger Nano X, Trezor T, and Ledger Nano S.

No, Ethereum is doing quite well now that ETH 2.0 is on the way. The project will only get better with time.

Is Ethereum better than bitcoin?

This is not an easy question to answer, since both are wonderful technologies. On top of supporting transactions, Ethereum supports smart contracts and the creation of decentralized applications (dapps).

Given the amount of development and support in place, the possibility of Ethereum failing is next to zero. There is no reason why this project can’t go on for the foreseeable future.