Despite the recent pause in the crypto bull market, Bitcoin’s hash rate continues to grow and reach new highs. In the last 24 hours, we have reached a new record if we take into consideration the average of the last 7 days.

This shows that the entire crypto market is bullish about the future of the most popular virtual currency. At the same time, with the mining hash rate, users can have a better idea of how secure the Bitcoin network is. Indeed, we can confirm the Bitcoin network has never been as secure as now. 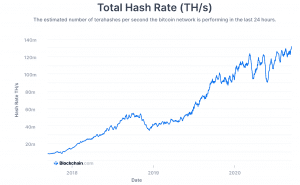 During periods of price growth, the hash rate tends to increase on a regular basis. The contrary happens when there is a price drop in Bitcoin. However, we can see that miners revenue is not as high as it was a few months ago. However, it is still higher than when Bitcoin was traded close to $3,200 in December 2018.

Not only Bitcoin is registering good hash rate performance. Litecoin is showing to be at its highest point since the beginning of October 2019. This is despite the fact that Litecoin’s price has been lagging behind in comparison to Bitcoin and other virtual currencies that were released to the market.

Litecoin was very close to falling from the top 10 for the first time in history when Polkadot (DOT) surpassed most of the virtual currencies in the market. However, Litecoin developers are now working in order to release a privacy feature that will allow users to send and receive LTC coins without sharing their private information. This will make Litecoin the largest privacy coin in the world in terms of market valuation.

At the time of writing this article, Bitcoin has a price of $10.350 and a total market cap of over $191 billion. Litecoin instead is the 9th largest virtual currency in the world with a price per coin of almost $49 and a market capitalization of $3.2 billion. It will be important to see how the Litecoin community reacts once the Mimblewimble privacy feature is released to the market.