Cardano (ADA), one of the most popular digital currencies in the world, surged over 5% in the last 24 hours. This allowed ADA to surpass Binance Coin (BNB) and get closer to Litecoin (LTC), which is now the 7th largest virtual currency in the world. One of the main reasons behind the price increase of Cardano was related to Coinbase allowing users to stake their ADA tokens directly on the platform.

Cardano is certainly one of the virtual currencies and blockchain networks in the market with the largest potential to revolutionize the market. Companies and users could start enjoying a network that was built based on scientific philosophy rather than on marketing, as many other coins in the crypto space. 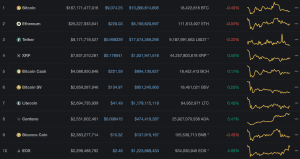 Cardano price increase of over 5.5%, allowed the virtual currency to reach a price of $0.098 per coin. This is the highest price reached by ADA since June 2019, more than a year ago. This shows how Cardano investors, holders and the entire market is paying close attention to the developments that are taking place in this virtual currency.

Coinbase is also going to be allowing users and Cardano holders to start staking their ADA tokens using the Coinbase Custody platform. This was launched by Coinbase in order for clients to be able to stake their coins directly on the Coinbase exchange.

One of the companies working on the development of Cardano, IOHK, informed that it had signed an agreement with Coinbase Custody so as to allow users to have the possibility to earn rewards on their ADA tokens. The new solution is expected to be available during the last quarter of this year. It is worth mentioning that the coins will be secure in Coinbase’s cold storage wallet.

With this new information available, users can be sure that Cardano is going to have support from some of the most popular firms in the cryptocurrency space and help users enjoy the Cardano ecosystem.