Cardano (ADA) users and enthusiasts are always waiting for new updates related to the official release of Goguen. Cardano developers and project managers released information on the progress of this new implementation. This is going to be the next upgrade to Cardano’s network that has been in constant development in recent years.

The Goguen era is getting closer and Cardano investors know that. There will be new smart contracts and native tokens running on top of Cardano. This is expected to open a wide range of possibilities for projects developers and the crypto industry as a whole.

The developers explained that they have implemented a structure of native tokens and commands called CLI syntax. This is going to be working with new tokens that will run on top of the Cardano network.

It is worth mentioning that Dimitris Poulpoulous, one of the project managers behind Goguen, explained that we are getting closer to the pre-production environment of this new update. In the future, as we mentioned before, projects, developers and companies will be able to release their own tokens on top of the Cardano network. 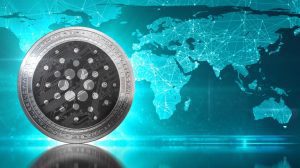 Nowadays, Ethereum (ETH), Tron (TRX) and EOS are among the best performing blockchain networks in the market. They allow for dApps to be deployed, tokens to be created and they also helped the DeFi market expand. Cardano wants to be part of this new trend and release Goguen as soon as possible with all these functionalities.

At the same time, to make it easier for developers working in other networks, Cardano will have a tool that will help them migrate tokens from other blockchains. This is expected to help onboard a large number of projects that want to have more efficient services and solutions.

Furthermore, they are also in the final stages of Plutus. This platform will also be in charge of executing smart contracts on the Cardano blockchain. Currently, developers would be able to play on an environment where they can try an emulated version of Cardano. This would help them understand how it works and which are the different functionalities.

Finally, Cardano could also see the official beta release of Marlowe. This is the language used by developers to create smart contracts on the Cardano ecosystem. While Ethereum works with Solidity, other crypto networks have different programming languages. Developers informed that they are very close to releasing a beta of Marlowe.