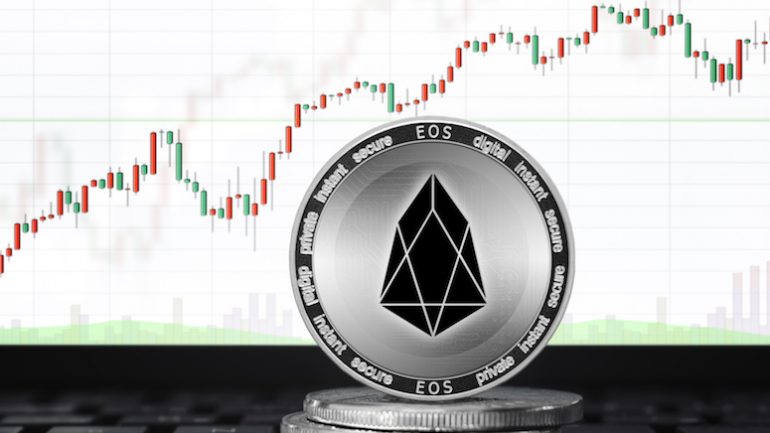 (Updated October 23, 2021) — EOS is only beginning its journey. EOS price is separated from other digital currencies, both in technical characteristics and the scale of its goals. This is one of the main reasons it managed to raise $4 billion during the ICO (Initial Coin Offering). The main objective of this platform is to become an enterprise-grade solution for the deployment of decentralized applications. The team behind the project have shown a very responsible approach to its technical documentation, appearance in the media, and overall presence in the crypto industry.

Experts’ Opinion On Why EOS Will Rise

EOS is the 8th largest digital currency in terms of market cap and it’s currently trading at $4.49 after a 10% change over the past 24 hours. The coin has become very popular due to its decentralized apps and smart contracts, which have proven to be better than Ethereum’s. Developers of the network state that it’s not affected by the scalability challenges that affect other public coins.

Let us take a look at why experts think that EOS’s price will rise.

According to CoinSwitch, 2020 will be a golden year for EOS. The coin is expected to reach $95 by July before declining slowly to the $56 level by the end of the year. Over the next five years, the platform expects the price of EOS to be around the $106 level.

TradingBeasts predicts that the price will grow from the $2 range to around $3.6. The following year the price is expected to continue to rise to the $4.2 level before ending the year at about $6.

According to Business Insider, the EOS platform will continue to evolve and will soon become the most preferred. The publications believe that the coin’s price will surpass $10 soon.

Additionally, a panel of 10 experts analyzed the performance of 13 leading cryptocurrencies to give their predictions. The panel was extremely bullish about EOS. On average, the panel expects the coin to reach a price close to $18.7, which represents an increase of 727% since January this year.

According to WalletInvestor, investors should consider EOS as a favorable investment option. The site believes that EOS’ price will reach $911 by 2023. They attributed this positive prediction to the recent developments in EOS platform and increased adoption in different industries. These are significant determinants of cryptocurrency’s success.

Investopedia also named EOS as one of the most promising digital currencies out of the many that exist today. The site mentioned that EOS offers more scalability compared to other cryptocurrencies and that it is revolutionary as it lacks a mining mechanism to produce coins. The platform also includes a system of complex rules to govern the EOS rewarding process, which makes it more decentralized. Forex broker in Australia are already offering forex and crypto trading.

Additionally, according to Coinbase, “EOS is a cryptocurrency designed to support large-scale decentralized applications. There are no fees to send or receive EOS.” The platform made this statement after adding support for the EOS cryptocurrency for its retail customers. This positive statement and development show that the coin has a bright future.

It is worth mentioning that EOS has also launched a new social media network called Voice. This had also a positive impact on the price of the cryptocurrency and it is expected to increase network activity.

For this EOS/USDT analyst, the virtual currency is currently fluctuating within an uptrend channel that is clearly seen in the charts. As he explains, the price is fluctuating close to the bottom of the channel. If the trend does not enter below the support line, then it might be very possible for EOS to start moving higher.

The support level is currently at 4.25 USDT and he considers that if EOS remains stable at these levels, then we could see this virtual currency moving towards 5.50 USDT in the coming days. It is worth taking into consideration that this would also be highly dependent on the entire crypto market as a Bitcoin ETF has been recently approved.

For the EOS/USDT trading pair, the expert sees that it could break out at any moment. As we see in the chart, the digital currency has found support at 4.60 USDT and it could be creating strong support in this region. The virtual currency could then start moving higher towards 5.47 USDT, 5,85 USDT or 6.31 USDT in the coming weeks.

The expert says that it is important to use a 1% or 2% stop-loss as a professional trader to avoid being liquidated and reducing our risk. It is worth mentioning that the next move upwards could take some time as the time frame for this analysis is the 1-hour chart, thus, it has time to reach these levels of up to a month.

The EOS/USDT trading pair analyst shows that the digital currency has resisted the 200-day simple moving average (SMA) and the RSI support before pumping again. As he says, looking at the RSI, if EOS is able to breach the RSI daily resistance, then we could move towards different levels, including 7.49 USDT, 9.489 USDT and ultimately 12 USDT per coin.

However, we know that the entire crypto market fell after news about Evergrande expanded early this week. It would highly depend on the general market the way in which EOS would recover in the coming weeks and eventually months if the crisis persists.

EOSUSDT is testing the Weekly support 🦐 by plancton0618 on TradingView.com

Let’s now move to EOS/USDT and this trading pair. The expert, in this case, is showing that there could be a breakout. This could be a great moment to open a nice order. He shows that there is monthly support and monthly resistance.

This can be seen in both the monthly and the weekly charts. In the daily chart, we see that there has been a parallel ascending channel in which EOS tested twice the top of the channel and then it went out from it downwards. However, the weekly support level helped the prize to get stabilized close to 4.4 USDT per coin. The price is now creating higher lows.

EOS/USDT has been in a descending trend for two weeks. The virtual currency made a top after trying to break through a resistance level when it hit 5.60 USDT per coin. Then, it retraced to 4.77 USDT and it tried breaking through the resistance region once again without being able to break through it. This is why we have seen a new lower low at 40.65 USDT a few days later.

Now, EOS/USDT is recovering and it has reached the middle of the descending trend. The main question would now be whether it would be possible for EOS to break through the resistance level at 5.20 and 5.60 USDT or not. The expert shows that if EOS breaks through its resistance level, it could definitely move towards 7 USDT per coin.

Want to learn more about EOS? Read our Beginner’s Guide to EOS here, complete with a history of the project and fundamentals of how the coin provides value.

Interested in investing in EOS? You’ll want to start with our EOS price prediction article —including short-term and long-term outlooks. (Always do your own research and read the site disclaimer)).

The best place to buy EOS is by using Binance. This buying guide lays out each and every step you’ll need to properly do so.