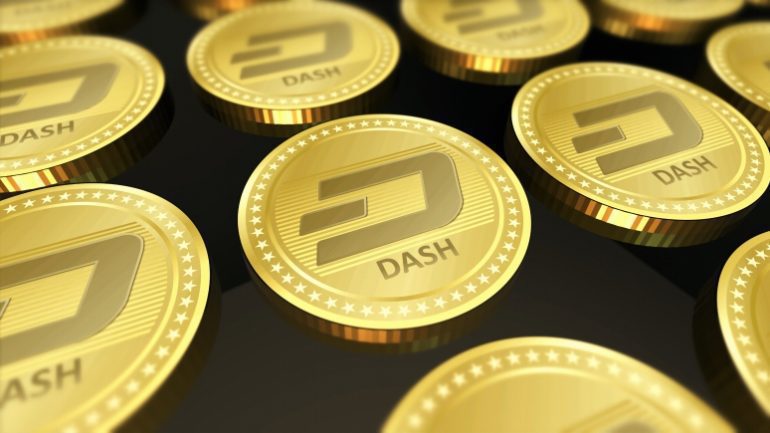 (Updated April 10, 2021) At the time of writing, Dash is the 20th largest cryptocurrency by market cap, with a total value of over $1 billion. Dash price currently sits around $119, joining other coins in being about 90% down from its all-time high. We’ll look at what’s happening with the Dash ecosystem, and trading charts to make our Dash Price Prediction for 2019 and beyond.

The aim of Dash is to provide a fast, borderless, untraceable currency for transactions. It achieves this through two features – “InstantSend” and “PrivateSend”. By default, these features are off. Users have the option to enable or not.

Dash has made traction as both a transactional currency and a privacy-centric coin. It is often named along with Monero and Zcash as one of the most prominent privacy coins.

Dash has a unique opportunity for coin holders. Instead of mining coins like one would with Bticoin, Dash offers a system of masternodes—allowing holders to earn passive income. Find out more in our Guide To Dash Masternodes.

In terms of Dash price, masternodes are an important element in the ecosystem because they ensure that a significant amount of Dash coins are not going to be for sale. They’re locked into the masternode system, paying out holders (you can read more about payouts here), but also creating a relative scarcity for Dash coins. If and as Dash gets more buyers, demand mixed with this scarcity can shoot Dash price up even further.

Of course, there’s still a lot to learn about Dash’s mining operations as well, which you can find out more information in our guide to Dash mining.

Experts’ Opinion On Why Dash Will Rise

Dash is an open source cryptocurrency and was forked from the Bitcoin protocol. The coin gives users the freedom to move money any way they want, for less than a cent. The platform has made inroads in Venezuela, Colombia, and is slowly expanding its presence in Thailand, and these developments have seen the coin’s price rise significantly since it was launched. Let’s look at why experts think the coin’s price will rise.

TradingBeast predicts that the price of DASH will be around $42 by the beginning of February 2020. The expected maximum price is $58 and a minimum price of $39. The coin is expected to end the month at around $46.

The predictions go on, and by December, the coin is expected to begin the month trading at around $74. The minimum price is expected at around $64 and the maximum to be around $95.

A recent article on the top 5 cryptocurrency performers on a leading crypto publication stated that the recent launch of version 0.14 on the mainnet upgrades the network’s security against 51% mining attacks, the first proof-of-work. Such developments have seen the coin’s price increase by 58% from 2018 to 2019, and this is expected to continue as the platform continues to grow.

2gether CEO, Roman Ferrez recently gave positive comments about Dash coin. In an article published on another leading publication, Ferrez stated that Dash is one of the most widely-used cryptocurrencies, and adding it to their list of 9 digital currencies opens them to new markets in the Eurozone. This shows that Dash has shown great potential, and as it continues to penetrate different markets, its price will be affected positively.

Other factors that are driving the price of Dash include;

The Dash Community Is Getting Stronger

Recently, DashRoots announced the launch of its platform. It will help individuals and teams have greater access to funding by the Dash community.

Martin, one of the founders of DashRoots, says the platform helps people at the grassroots level to bring their talents and skills to Dash. It happens by helping crowdfund their ideas directly from the Dash community.

He adds that the Dash treasury is a crucial part of the network. It enables evolution, but sometimes it’s too expensive to fund small ideas. It’s this area that Dashroots will aid the most. Helping people raise smaller amounts to bring their skills and ideas to the project at the grassroots level, “where small things can turn into big things.”

This kind of activism could see Dash come to the forefront of crypto adoption, going beyond innovative ideas like the SMS-based wallet it launched in Venezula.

There was a recent study on cryptocurrency transactions which found that Dash was one the most used currency in making small trades. It’s something that indicates its real-world use as money. The study involved collecting data from top cryptocurrencies from BitInfoCharts.

It was then used to establish statistics and trends that infer the nature of economic activity across different networks. The findings make for an exciting read. The stats show that Dash has consistently maintained a low average and median transaction values. Therefore, Dash is mostly used for retail purchases and other similar purposes.

Merchant data from Anypay also support the hypothesis. Also, Dash transaction volume data has remained constant despite that of other cryptocurrencies declining since the speculative winter bubble.

It indicates the increase in merchant transactions that counter the drop in speculative trades.

One of the leading Brazilian crypto exchanges recently announced that it was integrating Dash on their platform. It’s a move that would help significantly expand both consumer and merchant access to the cryptocurrency.

In a tweet made on Feb 28, the Coinbene praised Dash as a coin that would revolutionize the whole country, and it’s also a currency that even in the low market that could be consistently valued due to the coin’s focus on real-world usability.

Currently, the exchange boasts over 3 million active users around the globe and offers over 100 crypto pairs. It also charges the lowest fees in Brazil at 0.10% for buying and selling crypto.

This move comes at a time when Dash has been experiencing rapid growth in South America, especially in Venezuela and Colombia. The addition to one of the leading exchanges in Brazil will help the coin continue to grow its influence over Latin America as it will offer consumers and merchants more spending options when it comes to buying and selling.

DASH / USDT IN BINANCE WANT TO START MOVING by pedimoon on TradingView.com

As per the analyst of the DASH/USDT trading pair we see that the price of the digital currency wants to start moving on the Binance exchange, which is one of the largest in the market. In the spot market, he considers that the entry point should be between $214 and $280 traded against USDT.

DASHUSDT by RNR_ on TradingView.com

The second scenario shows that if it cannot break the line it might go lower than the current support line (this is very strong support). Moreover, the analyst explains that this is less likely to happen considering Bitcoin is currently in a steady-state (it would not fall more but it could certainly move towards $70,000 in the near future).

🔥 DASH In A Channel by FieryTrading on TradingView.com

For the DASH/USDT trading pair, this analysts shows that the digital currency is lagging behind other digital assets. If the bull run continues, it might follow the same slow behaviour. Furthermore, he says that DASH seems to have bounced from the lower support of the channel and it is making its way up again.

The entry level for DASH was at around 228 USDT on the Binance exchange. There are two resistance levels at around 250 USDT and 263 USDT.

It is worth mentioning that the analyst considers that before entering it could be a good idea to wait for the price to close above the entry level.

My Dash Buy by cowboysdepot on TradingView.com

The analyst is showing that there was a buy signal close to 200 USDT per coin. At the same time, he stated that Dash followed Bitcoin in this dip but the stop loss continues to be in place. He considers that Bitcoin could react near the 0.618 Fibonacci level.

At the same time, he says that if Bitcoin wants to move downwards once again, then the trade should be closed around 284.25. In addition to it, there are two main targets in case the market turns bullish. The first target is 373.96 per Dash and the second one is 421.42 USDT. Nevertheless, we need to wait for the market to turn bullish.

DASH can run a lot higher if btc stays stable by SvarogPerun on TradingView.com

The Dash analyst is showing that DASH could start moving towards $300 in the near future. In order for that to happen, the virtual currency will have to break through the current resistance at $224 per coin. This is going to be tough considering it try doing so recently but without success.

Of course, DASH is linked to the price of other virtual currencies in the market, including Bitcoin. If the entire crypto market continues moving higher, then we could eventually see DASH also expanding. At the moment, it might take some time before a new breakout. However, this is not financial advice and the market could definitely fall.

Interested long-term parties can gain a portion or a whole masternode at a cheaper price.

As detailed above, there is hope and optimism within Dash and it shows in the above charts.  So, we can expect to see Dash perform better in the coming months.

Lastly, if you’re looking to buy (or trade) your Dash, you can do so on many exchanges. We recommend trying out Kucoin. You can find a guide on how to do so here (note: we do not own this guide).