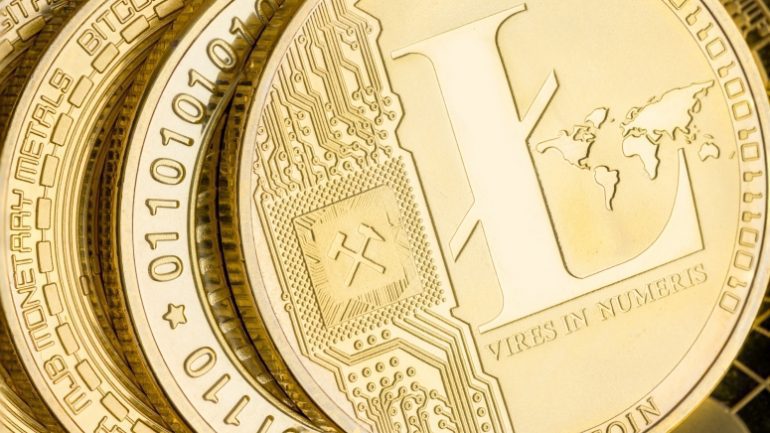 A Litecoin mining pool will help you combine your computing power with other Litecoin miners to increase your probability of finding a block with transactions. In this way, you would receive the block rewards and the fees paid by users when they send a transaction.

This guide will help you find the best litecoin mining pool, understand the differences between solo mining vs pool mining Litecoin and how to start mining LTC.

Litecoin is one of the oldest and largest virtual currencies in the world. LTC has been a leading currency in terms of development. The team behind Litecoin has used LTC as a test network for Bitcoin. That means that before implementing a new BTC improvement, it was added to Litecoin to test it.

Litecoin is very similar to Bitcoin. Indeed, Charlie Lee, the founder of Litecoin, created it as a fork of Bitcoin but added some changes to this virtual currency. The main difference with Bitcoin is related to how fast and cheap it is to send an LTC transaction.

Bitcoin users usually move to LTC in order to make small and fast transfers. While in Bitcoin it might take between hours and minutes, in LTC, the transfer gets processed usually in the next available block. Moreover, fees are sometimes ten times lower than on the Bitcoin network.

Litecoin is a leader in the market and it could continue expanding in the coming years. As a Proof-of-Work network, users can mine LTC rather than purchasing it. It became very profitable for users to mine LTC when its price was close to its all-time high. Now that LTC price is above $200, it can be a good option to mine this virtual currency. You can use any of the Litecoin mining pool sites that we share in this guide.

What is Cryptocurrency Mining?

Over the last years, it became very difficult for single miners (individuals) to be profitable. This is why a mining pool is the best solution to find blocks.

Cryptocurrency mining is different from cryptocurrency staking. Some blockchain networks work with a Proof-of-Stake (PoS) consensus algorithm. Rather than buying and purchasing equipment (PoW) to mine virtual currencies, PoS networks require users to stake and freeze their coins in a crypto wallet to get rewards.

Each miner in the crypto network receives a reward equal to the hash power provided to secure the network. If a miner represents 20% of the network, it gets 20% of the rewards of each block. The larger the hash rate, the more secure a network becomes. The most secure blockchain network in the world is Bitcoin.

The larger the hash rate, the more difficult it is for a group of miners or attackers to perform a 51% attack on the network and revert transactions.

What is Merged Mining?

Merged mining – also known as auxiliary proof-of-work – is an activity that consists of mining two different digital assets at the same time. The main advantage of merged mining is that users do not have to sacrifice mining performance and can increase their rewards.

One of the largest merged mining networks for Bitcoin is RSK. In this way, BTC miners mine both RSK tokens and also BTC. For the Litecoin digital asset, miners can mine both Litecoin and Dogecoin (DOGE).

It is worth mentioning that DOGE was able to surpass LTC in terms of market valuation in early 2021. Thus, merged mining could be a great possibility for miners to increase profits.

Over the last years, merged mining became very popular. This was one of the easiest ways for users to increase their mining rewards over time. They do not need to buy better mining hardware but they can easily mine two digital assets (with a similar hashing algorithm) at the same time and without sacrificing efficiency.

What is a Litecoin Mining Pool?

A litecoin mining pool works by grouping cryptocurrency miners in order to have higher chances to find a block. A block on the Litecoin network takes 2.5 minutes to be generated and it rewards miners with 12.5 LTC plus the fees paid by users.

By mining with a group of other users, your hash power provided by your hardware would work side by side with others. In this way, the rewards you get are also higher. By using a Litecoin pool mining group, you increase your chances of finding a block.

When you do a Litecoin mining pool comparison, it is important that you understand the main differences between them. One of the things to take into consideration is the location in which the mining pool is located. If their servers are in a region far from your location, then it might not be ideal to use this litecoin mining pool.

It is worth pointing out that we are talking about Litecoin and not about a Litecoin cash mining pool. This is a different digital asset that we are not covering in this post. If you want to do solo mining, then you do not need to search for a Litecoin mining pool.

However, solo mining is much more difficult to do considering that you should have a large network hash rate. With the current size of the market, the only way to earn rewards is by mining with other users in different Litecoin mining pools.

There are several mining pool litecoin websites currently available. Most of them are focused on the Chinese market where most of the larger miners are located. However, you can select from a wide range of mining pools with different characteristics, fees and solutions.

You don’t need to create Litecoin mining pool on your own. There are many LTC mining pools available in the market. You can select them according to your needs and the services they offer.

ProHashing offers users the possibility to get paid in the coin they desire. For example, you could mine LTC and get a reward in another virtual currency such as Ethereum (ETH). This is one of the features that make this mining pool special.

ViaBTC is another large Litecoin mining pool. This company is not only offering LTC mining but also other digital assets such as Bitcoin, Ethereum Classic (ETC), Zcash (ZEC) and many others. Thus, you can always change from one digital asset to another.

The platform has been working with Litecoin since 2017. That means that several customers and clients have already used this solution to mine Litecoin. At the time of writing, ViaBTC represents 13.4% of the Litecoin hash rate around the world.

It is worth mentioning that it is possible to do merged mining using ViaBTC. The platform activated merged mining for Litecoin users. LTC miners can mine both Litecoin and Dogecoin and earn more rewards with their hash power.

Not every single mining pool is offering this possibility. You should analyze whether this can help you increase your profits over time. This Litecoin mining pool server could be one of the best if you want to maximize your profits.

LitecoinPool.org is considered a Litecoin mining pool best suitable for users that have been in the market for several years. This pool works in a very efficient way and it has an exclusive ultra-low-latency Stratum server implementation.

This platform is also supporting merged mining that would be paid out in Litecoins to users. Moreover, it has a network of 8 geographically-distributed and redundant servers. This could be very useful for many users that are not located in Asia or China.

The LitecoinPool.org uses a Pay-Per-Share (PPS) rate that is expressed in LTC. Moreover, it also takes into consideration the funds mined thanks to merged mining with Dogecoin. The company claims that they pay always for the work even if the pool has not yet solved enough blocks to cover the earnings generated.

This platform is among the oldest with Burnside litecoin mining pool. However, Burnside’s solutions are not available anymore and have been replaced. In this way, LitecoinPool.org shows it is a resilient platform to mine LTC.

This shows that this platform has a clear advantage compared to others in terms of mining power. The larger the hash rate, the easier it becomes to find blocks and get a block reward. Thus, if you want to maximize profits, you should definitely consider Easy2Mine.

Easy2Mine offers users different mining pools for cryptocurrencies such as Ethereum, Bitcoin Decreed (DCR) and Litecoin. It is worth taking into account that the platform supports PPS+, PPLNS and solo Litecoin mining. Moreover, the payouts are always on time.

One of the positive things about the largest Litecoin mining pool is related to its 7/24 customer support service. They are working on a daily basis in order to offer clients the best solutions to their problems.

If you are planning to start mining Litecoin, Easy2Mine could be one of the best solutions in the market right now. However, remember to always analyze the fees you have to pay (which are usually changing) and the hash power the platform has.

If you want to know how to do solo mining on the Litecoin network, then you should check LTC.Solopool.org. This site is helping users mining Litecoin in just a few simple steps.

Solo Litecoin mining would allow you to reduce your dependency on a mining pool. Indeed, if you have a large hashing power (you are a miner with hundreds of machines) then you could start mining alone and earning block rewards.

However, this might not be a straightforward thing to do. If you want to maximize your profits, it might be better to use a mining pool. These companies have been working in order to make mining activities much more profitable and efficient. Furthermore, you should have a large hash rate to do solo Litecoin mining.