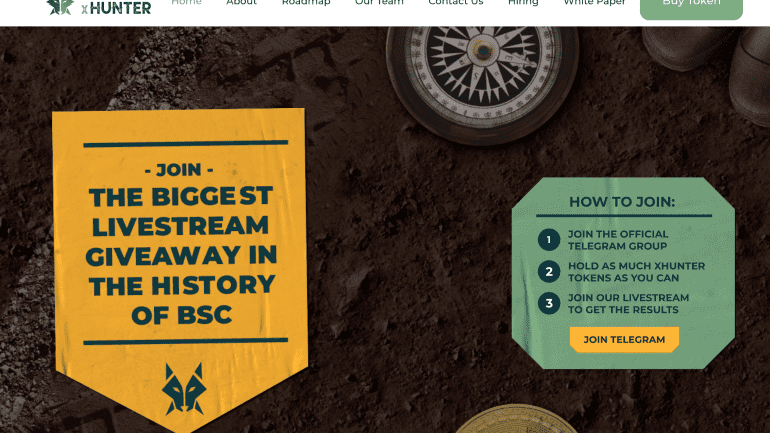 We have seen the expansion and creation of thousands of tokens over the last few years. However, one token that has never been envisioned before is now going to be publicly launched with a market valuation of $1.5 million. We are talking about xHunter.

In this guide, we are going to share with you all the details about the xHunter, their vision and how this token works. Furthermore, we will go over why they decided to use the Binance Smart Chain (BSC) and why their project should be closely followed in the coming months.

Let’s now get into the article!

What is the xHunter Project?

The xHunter project is an initiative and crypto project that aims at becoming a meeting place between outdoors and Blockchain technology. One of the main goals behind this project involves hosting some of the largest outdoor tournaments and events worldwide. But this is not the only thing related to xHunter.

They are also working to include non-fungible tokens (NFTs), blockchain technology, and more. xHunter is based on several different pillars:

Users will be able to participate in the many diverse events of this crypto project by holding the xHunter token. This is not going to be the only positive thing about holding xHunter tokens. There are other things that are worth taking into consideration and that would help the entire community engage with the xHunter community.

The goal is to involve and offer some of the largest no-loss lotteries in the history of the cryptocurrency market. These prize pools are expected to have a positive impact on the whole xHunter community and the crypto ecosystem due to different reasons.

As the official site of the project explains, the no-loss lotteries are designed to reward holders while also contributing 50% of the prize pool towards $XHT token buybacks.

But of course… how is that all even possible? The team behind xHunter has created a unique tokenomic project in which they developed a buy-back system designed to create constant hype and cycles without waiting for bullish news to push the price of the token higher. As they claim, this is expected to help the token grow organically and rapidly.

It is also worth taking into consideration that xHunter has already raised approximately $400,000 during its private sale and it is expected to raise another $350,000 in the public pre-sale on September 3rd. Furthermore, this would help the company reach a starting market capitalization of $1.5 million when it launches on September 5th.

One of the main characteristics of this project is related to the fact that it is linked to the Binance Smart Chain network. The BSC blockchain network was developed by the cryptocurrency exchange and ecosystem Binance.

Binance Smart Chain operates with a much more efficient system to process transactions and information. In this way, it is possible for investors to send and receive tokens without having to pay for the massively large fees that nowadays affect the scalability of the Ethereum network. Additionally, BSC has fast transaction times, which makes the whole ecosystem much more scalable and efficient to use.

xHunter is helping the Binance Smart Chain grow even further and offer better solutions to users from all around the world.

No-Loss Lotteries that Benefit You as a Holder

The project is working in order to host some of the largest no-loss lotteries ever. But how do these help you and benefit you as a token holder?

Holders of the xHunter token will be incentivized to participate in this growing economy in different ways. There would be regular snapshots on the network that would mostly reward holders that don’t sell their coins. This is where becoming a diamond holder becomes valuable.

The team wrote about the xHunter project:

“We will clear up the notion that crypto currency is a scam. It is time to show the world what we can accomplish through the power of the blockchain technology. Imagine the lives we could change. This could very well be the catalyst for the next bull run. That’s what we are aiming for.”

There are some other characteristics that are worth taking into consideration about the xHunter project. For example, the project’s main focus is to grow a strong community with investors that would feel passionate about their goals and that would also be at the core of the network.

One of the things that this team does is going outdoors. They love that and they are searching for ways to promote digital currencies in a positive way. There will be global initiatives promoted for individuals all around the world so that everyone would be able to participate in the most exciting initiatives.

But there are also two other important things to take into account: sustainability and also service excellence. When xHunter talks about sustainability, they take into consideration their tokenomics and how they are expecting to grow the project even further.

With a clear and robust tokenomics project, they are going to generate multiple streams of revenue (including an online merchandise store) rather than re-arrange wallets on a regular basis.

Finally, with a focus on the community and its goal to offer a service of excellence, they will be thinking about how to innovate, bring new projects and move ideas forward. This is definitely going to make it easier for investors to feel they are involved in the cryptocurrency market. A service of excellence also means updating their systems and becoming a market leader in terms of innovation.

The team behind xHunter has been working for several years in different industries and projects. This shows their professionalism and commitment to their new xHunter idea.

The CEO of the platform and project is Moudi. He is a professional investor that discovered his visionary nature at a young age. Because of this characteristic, he was able to work on a large number of successful enterprises and companies in his career. xHunter is one of the latest projects in which he is involved.

Abdul Qadir Khan is the CTO of the platform. He joined the team as a professional commodities and forex trading expert. He has been working on derivatives trading in the corporate banking and finance sectors for many years. His knowledge and information about the financial markets would let him push the entire project further.

Finally, the COO is Mohammad, an enthusiast of the great outdoors and adventures. He loves to organize explorations and connecting this passion to the blockchain market and crypto industry.

xHunter is a project that wants to give back as much money as humanly possible to people. The priority for the team is to focus on the people that invested in the project and that believe in the future of their initiatives.

With its wide range of solutions and offerings, xHunter aims at becoming a leading crypto project. It would be a matter of time to understand how the xHunter reacts to the market after its official launch on September 5th.

The project might be listed in the future on some decentralized exchanges such as PancakeSwap. This would also depend on the project’s reach and community demand for the xHunter token. At the moment, this project runs on top of the Binance Smart Chain.

You can also learn more about the xHunter through the following links: