XRP was able to become the top gainer cryptocurrency among the top 10 after a price increase of 5.55% in the last 24 hours. As reported by CoinMarketCap, no other digital asset in the top 10 was able to register these large gains during the same period of time. Investors see an opportunity in XRP that remains yet below the highest point of this year.

XRP has been the best performing cryptocurrency in the last 24 hours among the top 10. During the last weeks, the third-largest cryptocurrency was able to register impressive gains that allowed it to be close to the highest point it reached this year before the negative effect of the Coronavirus on the international markets.

The cryptocurrency market has been in a bullish mode during the last few weeks. Most of the virtual currencies in the market have reached local highs and many others have already surpassed their highest price in over two years. However, XRP price remains far from its all-time high from 2018, which shows there is still a large potential for XRP to continue moving higher. 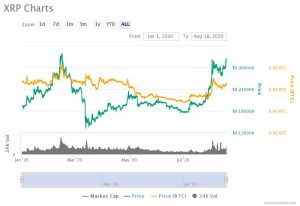 One of the hottest cryptocurrencies in recent weeks has been Chainlink (LINK) which was able to surpass its previous all-time high and move towards new highs almost on a daily basis. This bull run allowed traders and users to register large gains.

Meanwhile, Ethereum (ETH) and Litecoin (LTC) are also showing bullish signs. Ethereum, registered its highest price since August 2018 when it was able to surpass $400 for the first time since then. Many investors and analysts consider that ETH could continue growing pushed by the large number of DeFi applications that are being released to the market and due to the huge impact they are currently having in the whole industry.

Furthermore, Litecoin with its privacy-focused implementation they are working on could also be ready to continue a new bull run. In the last 24 hours, LTC was the second-largest gainer among the top 10 after XRP. If the privacy solutions are finally implemented on Litecoin, this is going to be the largest-cap virtual currency protecting users’ privacy when they send and receive transactions.

The crypto market is in good shape. We can see it in how fast digital assets are growing and how some altcoins are reaching new all-time highs. The main question is whether it will be possible for Bitcoin to start a new bull run in the coming days and weeks.