XRP price continues to show its positive performance in recent weeks by remaining in positive territory despite a moderated correction in the market. Most cryptocurrencies in the space are registering corrections between 2% and 10% in the last 24 hours. Meanwhile, XRP is registering the largest growth among the top 25 virtual currencies.

The entire cryptocurrency market has been in a bullish mode for the past week. Altcoins and Bitcoin (BTC) were able to register massive gains not seen in several months. At the same time, Bitcoin and other coins such as Ethereum (ETH) are getting closer to important resistance levels.

Meanwhile, XRP was able to catch up with other digital assets that registered massive gains in recent weeks. Since early July, XRP registered a growth of 78.63% showing one of the largest growths among the top 10 cryptocurrencies. During the last years, Ripple has been attacked by the community for selling large amounts of XRP to the market increasing the selling pressure on XRP and devaluating it.

Nonetheless, it seems that XRP is now resisting very well a correction that affected the entire market but didn’t affect this virtual currency. At the time of writing this article, XRP is growing by 6.39% compared to most altcoins registering large losses, with the exception of ETH that is growing above 3.7%. 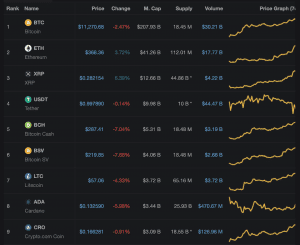 Bitcoin has also been in a bull trend in recent weeks. The largest cryptocurrency moved from $10,000 to over $12,000 in recent hours in some exchanges, showing it has enough strength to continue growing once it passed $10,000. The entire crypto market is very excited about the future of the space and how it can reach new all-time highs in the coming months.

XRP is also at the forefront of the market with a market valuation of $12.66 billion and enough strength to surpassing previous resistance levels and moving with the crypto market if it continues moving higher.

Ripple continues working in order to offer new and better services to financial companies around the world. If these firms decide to start using the XRP digital asset to increase their liquidity in some currency corridors, it may be possible for XRP to have a higher demand and increase in price.

Finally, we can expect Bitcoin, Ethereum, XRP and Litecoin (LTC) becoming leaders in the market considering they are the most accessible virtual currencies in the world.