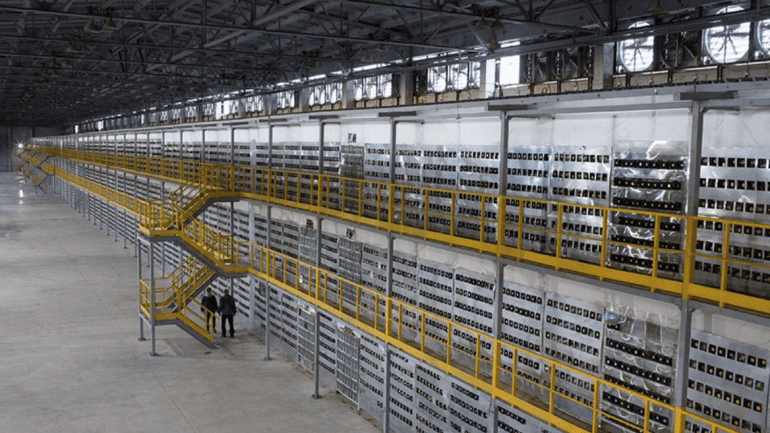 That means that blocks were processed by miners faster than 10 minutes on average. Therefore, the Bitcoin network auto-adjusts itself in order to keep Bitcoin’s supply in line with the protocol (900 new BTC mined each day) with 10 minutes blocks on average.

There can be moments in which the difficulty adjustment moves higher and others in which it moves slower. The higher the difficulty, the more difficult it becomes for miners to mine new blocks. Hence, the more efficient miners would then be able to remain active in the market. If difficulty continues to grow because new miners enter the market, then, only those miners with the most efficient operations would be able to succeed. 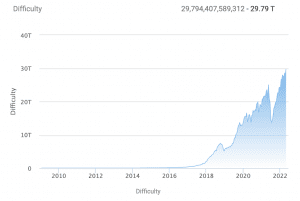 Bitcoin’s total hash rate reached a new all-time high as well on April 27th. It has reached a total hash rate of 220.49m TH/s. That means that the Bitcoin network has never been more secure than now. It would require an incredibly large amount of energy for the Bitcoin network to be attacked. Another important thing to take into consideration is that economically, it has no sense for a third party to attack Bitcoin (if they want to have an economic benefit with it).

The network difficulty has adjusted higher due to the recent increase in terms of hash rate for the Bitcoin network. Should the hash rate continue to grow in the coming months, we could see the Bitcoin mining difficulty adjustment move higher once again and reach new highs. 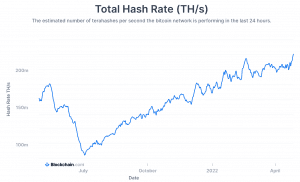 Another thing that is also worth pointing out is that Bitcoin’s hash rate is already 22% higher compared to its peak in 2021 before the large mining capitulation in China. Last year, China banned miners from operating on its soil. This created a large exodus of miners to other countries. Due to this reason, Bitcoin’s hash rate fell by over 50% in a matter of weeks in 2021.

Despite that, and thanks to the Bitcoin mining difficulty adjustment, we see Bitcoin’s hash rate reaching new all-time highs and becoming more secure every single day.