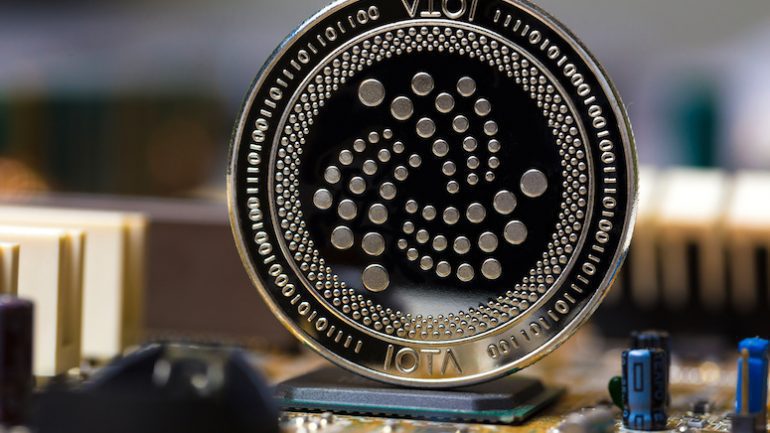 (Updated April 10, 2021) IOTA was developed by a German team and created to support the Internet of Things (IoT) revolution, using an innovative blockchain system called “tangle”. It was created to enhance communications, transactions, and payments between machines (i.e. M2M interaction).

Considering the speed with which artificial intelligence is gaining global adoption, IOTA is and was ahead of its time when it was conceived. Part of IOTA’s unique features is that it is one of the few altcoins that cannot be mined, has no blocks, and has no chains. It comes with infinite scalability and very fast transaction times, which give it an advantage over the Bitcoin blockchain, for instance.

Still, IOTA has been held to the same whims as the rest of the crypto markets; a big swing up in 2017 and early 2018 and then a big fall down for the last four months. The team continues to add partners and use cases which make IOTA a popular headline on our site and others. And there are a lot of bullish technologists that see IOTA’s tech as superior to many others on the market.

At present, IOTA is #21 on the crypto charts with a market cap of over $800 million. Its cryptocurrency is currently trading at $0.29 after a 12% change over the past 24 hours.

Still, for IOTA’s price to truly recover to its 2018 highs—where it started around $3.61, more time is needed. The partnerships need to coalesce, and the chain itself needs to showcase its ease and speed through millions of transactions.

With IOTA still tied to Bitcoin, and partnerships in their nascent stage, IOTA’s price is not likely to have an upswing on its own in 2019. Beyond this year, it could make the kind of changes to the world of logistics and IoT processes that it purports to be able to do. But that’s looking down the road.

Experts’ Opinion On Why IOTA Will Rise

In 2017, almost all digital currencies, including IOTA, experienced significant gains in a short period. For instance, IOTA provided a 12500% return on investment in less than six months. However, the question now on everyone’s mind is what the future holds for IOTA price. Let’s look at what experts are saying regarding the coin’s future price to help answer this question.

There are some industry experts whose opinions can have a significant impact on the price of cryptocurrencies. One of these industry experts is John McAfee, who has given several views on many cryptocurrencies. Through a tweet, MacAfee stated that IOTA would experience growth, but this will be slow, about 10% increase every year. Although this may seem like a meager digit, it still shows that the coin’s price will continue to rise.

Tim Falk, an expert writer for Finder.com, stated that the Internet of Things had shown potential for huge growth in the future. For instance, Google acquired Nest, a smart-phone automation company for $3.2 billion in 2014. This acquisition shows that Google expects the IoT industry to boom soon, and since IOTA is based on this technology, it may experience increased adoption, leading to an increase in the coin’s price.

Additionally, the social crypto platform smartereum.com predicts that MIOTA is set to hit $5 shortly. According to this source, the prediction is based on factors such as the strength of the developer team, technical prospects, and continuous development. As such, the coin’s price will continue to rise.

Several times we have seen how IOTA was able to skyrocket in just a few hours. This shows there is a large potential for this virtual currency in the future. For example, IOTA was able to move higher by over 15% with Tezos (XTZ) just a few months ago. One of the main questions that the community is doing is whether it will be possible for IOTA to move towards $55 per coin.

Other factors driving the price of IOTA include;

The first working product of the collaboration between IOTA and Volkswagen is set to be released by June of this year for public use. Digital CarPass is a practical application of the IOTA technology for vehicle telematics data.

The new product will allow a vehicle to tell its story like where it went and how it was treated. Also, it will offer tamper-proof mileage history and protect against odometer fraud in the case of second-hand vehicles. Simply put, the Digital CarPass will act as a report-sheet for cars on the distributed ledger to ensure data recorded like mileage is accurate.

According to Benjamin Sinram who is the head of the blockchain at Volkswagen, the car manufacturer is exploring distributed ledger technology and cryptocurrencies in unison with teams like IOTA and Energy Web Foundation.

He added that the vision of Volkswagen is to focus on autonomous cars that will carry out transactions on behalf of their owners using cryptocurrency wallets.

“We want to enable our autonomous cars to (provide) services for you and pay autonomously for these services with their own money.”

According to Sinram the product will be launching before the end of Q1 and given that this is huge for the car industry we can expect a lot of positive buzz surrounding IOTA, and it should reflect on its price.

IOTA Prepares for the Bull Market

During bearish periods, crypto experts advise projects to build the necessary infrastructure to really make their product applicable. And this is what IOTA and its team are doing.

At the moment, the IOTA community is working hard in order to have different products launched. To start, Trinity Wallet is being used and touted by IOTA enthusiasts. The Trinity Wallet works to establish a go-to and secure wallet for holding coins; an easy on-ramp for future holders to get into IOTA investing. This is a wallet addition to the already established method of storing IOTA on the Ledger wallet, which you can find more information about here.

The second important project that is being developed is a new digital ID. The world is moving into digitizing everything, including personal information. IOTA’s team is working in an important digital ID solution that will use its “tangle” technology. Although there is no official timeline for this project, developers are implementing Verifiable Claims Protocols to improve their services. 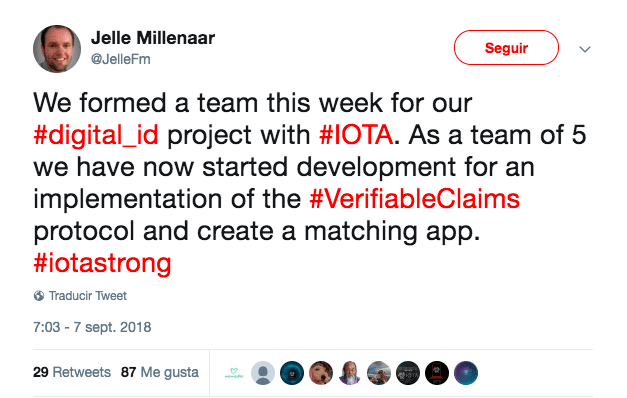 The ID project that is being developed is just one of the several projects that IOTA has signed with different car manufacturers.

There are several other projects in the works involving IOTA. For example, some countries such as Sweden and Netherlands are working with IOTA to improve different administrative processes.

The Swedish Central Bank (Riksbank), for instance, wants to launch the digital version of the Swedish Krona. The e-Krona will be based on IOTA and might be launched in 2019.

Additionally, two companies in the Netherlands, ICTU and XURUX, are investing in a project to verify legal documents within the ‘IOTA Blockchain.’

Projects like this boost IOTA’s standing as one of the more “practical” and “applicable” crypto assets. Its technology has shown potential benefits for these different sectors, and the bear market isn’t stopping IOTA from creating value.

In another recent move worth mentioning, ENGIE Lab Crigen has partnered with IOTA Foundation. The two companies will work on a blockchain-based smart energy ecosystem. In the partnership, ENGIE will use its computer and artificial science to enhance IOTA tangle. According to an official blog post, the team will learn from each other through experimentations.

The IOTA blogpost further revealed that the two firms had signed an agreement to establish a cooperation deal between them. They will initiate smart energy systems made of two fundamental tools. The first, to manage server-based blockchain infrastructure and creation of cloud base systems. The other, focus on improving smart contracts.

Per the announcement, the company is primarily targeting the Asian market and intends to roll out the services before next year. ENGIE will further extend its services to southern Europe before May 2019. While making the announcement, Yves Le Gelard, ENGIEs vice president, expressed his delight by saying that:

“We are excited to be part of this program, which will make it possible for many actors to access the blockchain technology. It is a perfect example to show how ENGIE is digitally transforming the society,”

In the announcement post, Phillippe Calvez, a Lab Research Manager, commented that:

“Most proofs-of-concept and activities have already been initiated in the lab and thus we look forward to collaborate with larger international projects. The partnership will enlighten more people on the benefits of using innovative DLT technologies.”

It is worth pointing out that IOTA has also partnered with Audi, one of the largest car producers all over the world.

For the IOTA/USDT trading pair, we see that there could be a push up on its price with the upcoming Chrysalis update. The analyst shows that the market could be forming a new leading diagonal that is a short-term bearish pattern with a long term bullish outlay.

The analyst considers that it might be possible for the price to move lower before continuing upwards. He gives the example of how Elliott Waves behave and how they operate. We could be initiating the wave 3 of the 5-wave cycle for this trading pair. The first target that he gives is the first resistance that was formed in 2018 (2.75 USDT).

the forgotten IOTA BACK? = YES YES THE GREEN COFFEE TIME COMING by watchtrend on TradingView.com

The IOTA/USDT trading pair looks that it could move higher in the near future according to the analyst. The expert considers that “the forgotten IOTA” could be back with a bullish movement. However, this could only be confirmed with time and a clear price increase from IOTA.

The analyst shows that IOTA experienced a bullish trend in recent hours and this could push the price higher to 1.716, the previous high reached a few days ago. Nevertheless, it is time to wait and see how this virtual currency is expected to move in the near future. A strong support level is currently at 1.41 USDT.

iOTA target 1.78 by omurden on TradingView.com

The analyst is sharing his 4-hour chart of the IOTA/USDT trading pair and he considers that there is a clear channel and cup & handle formation in the chart. The first target for the analyst was at 1.78 USDT and a stop loss close to 1.23 USDT or following the channeñ.

He considers that traders should closely follow the price action of IOTA using this 4-hour chart rather than other charts. In this way, they will be able to avoid panic selling or making wrong moves. He has also mentioned that the 1.335 price could also be an entry-level again in support of the 200 EMA in the 1-hour chart.

IOTA Buy the dip. by Signal_Centre1 on TradingView.com

IOTA, one of the most promising digital currencies in the market could look like a good buy at 0.993 USDT as per the analyst. The daily signals that the trader shows are bullish. The important thing was to close above the 1 USDT level.

Another thing that he mentioned is related to the large number of buyers that appear every single time there is a dip in the market. Furthermore, the pivot support is currently at 0.939 USDT per coin. The profit targets for the analyst include two: 1.193 and 1.273 USDT.

IOTA/USDT has already started Phase D and the SOS is IN. by Mizo_Mizo on TradingView.com

IOTA was able to make a 100% gain in recent weeks. Now it might be possible for IOTA to start a corrective wave that could push the price 30% to 50% downwards. Although this is not confirmed, this is what the analyst believes that can happen. In addition to it, a “SOS” alert was shown in the chart, indicating that it could be a good moment to sell rather than entering the market.

The next support level is currently at 0.56 USDT and the digital asset could eventually move to these levels. Nonetheless, the crypto market remains bullish and we might not see yet a local top for it.

Learn how you can buy MIOTA on Binance with info in our guide, as well as one on how to store MIOTA on Ledger.